Yesterday, we reported on a new trailer for Pokémon Sun and Moon that showed off a bunch of new Pokémon. The trailer being in Japanese, however, had the Japanese names for the Pokémon. Now, we have an English language trailer, which includes the English names for the Pokémon, complete with more information (via NeoGAF). Have a look below. 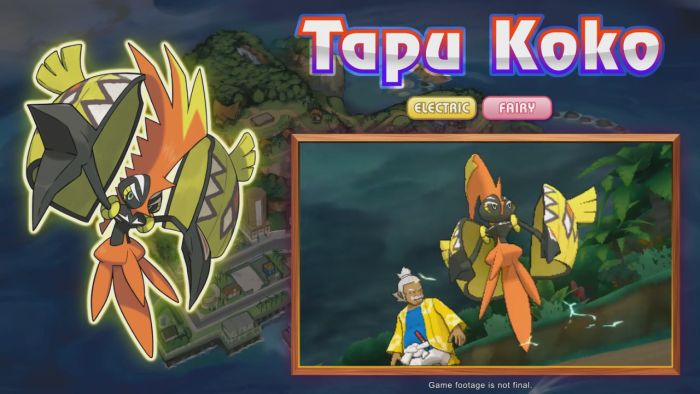 First up, we have Tapu Koko, seen above, who was seen in the Japanese trailer under the name Kapu Kokeko. And it turns out my Japanese was spot-on: Tapu Koko is indeed the Guardian of Melemele Island. His ability is Electric Surge, and he has a new move: Nature’s Madness.

Then, we have a surprise. It turns out that Dendenmushi, the cubical little electric bug is in fact an evolution of Grubbin, and is called Charjabug in the English version of the game. The third evolution in the series, named Kuwaganon in Japanese, is called Vikavolt in English. Both are Bug/Electric type Pokémon. The Chinese Dragon-inspired Jijiiron is named Drampa (Dragon + Grampa?) while the goofy pink fish Pokémon Hagigishiri is named Bruxish.

Next up, we have Cutiefly. I called it cute in my previous post, but doing so again would be just redundant. Next up, there’s Togedemaru, whose name will be the same in both English and Japanese. Finally at the end, we’re given a look of Zygarde’s forms, which we’ve already seen in the Japanese trailer before.

Let us know what you think about these Pokémon from Pokémon Sun and Moon in the comments below.