The drip-feed of new Pokémon continues with the reveal of a new Pokémon for Pokémon Sun and Moon. The latest revealed critter to join the roster is the Fire and Poison type salamander Pokémon, Salandit. If one half of the word ‘salamander’ went to Charmander, then this is where the other half ended up. This is, so far, a unique combination in the series, making Salandit the first Pokémon to have a Fire/Poison combination. 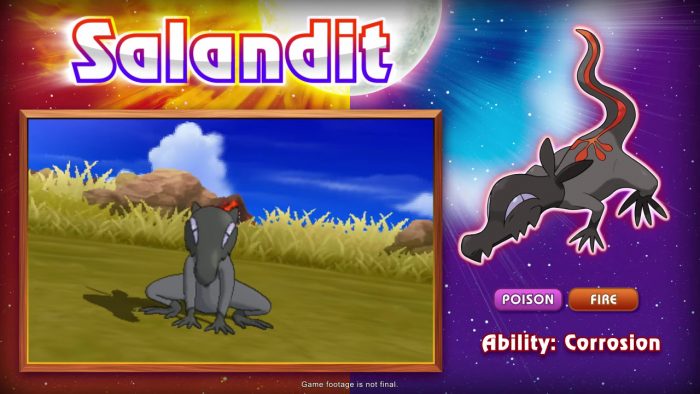 He looks like a pretty dark little monster, with an invisible grin. There’s a ‘bandit’ theme going with this one (Salamander + Bandit = Salandit), and the most obvious nod to that are the “ears” on the back of its neck, which makes his black head resemble a mask tied onto the head. His eyes also give off the look of a knowing wink. Finally, as if to affirm his status as being half-Fire type, he has a red mark on his back.

Salandit’s special ability is Corrosion, which allows him to poison any Pokémon, including those who are resistant to being poisoned, such as other Poison Pokémon, and Steel Pokémon. The trailer demonstrates this by showing off this salamander bandit poisoning a Zubat and a Skarmory.

Pokémon Sun and Moon release on November 18th, 2016. We’ll likely continue to see a lot, lot more Pokémon until then, so be sure to keep following our coverage.