A new trailer has been released for Pokémon Sun and Moon, but the catch is that it’s still in Japanese at present (via NeoGAF). We expect the English version of the trailer to be released tomorrow, but there’s still plenty to see in this Japanese trailer for the games. This trailer focuses on new Pokémon that you’ll be meeting – and presumably catching in Pokémon Sun and Moon. These Pokémon should be common to both games. 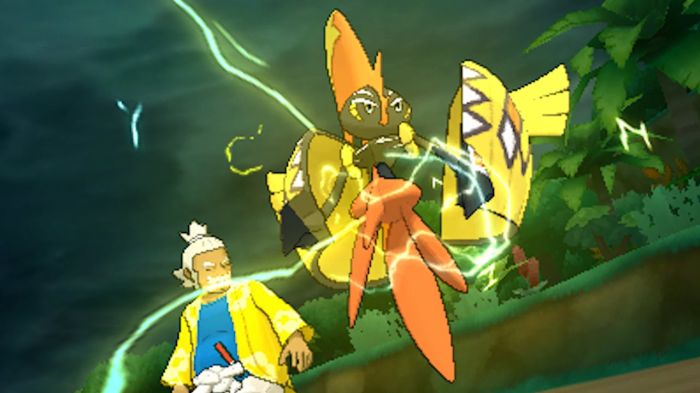 The Pokémon showed off in the trailer start off with Kapu Kokeko, who is a Lightning/Fairy Pokémon. You can have a look at him above. My Japanese is a bit rusty, but if I’m mistaken, he is described as the protector of Melemele Island. This is then followed by a number of Pokémon found in the Alola region.

We see the very compact and cubical Dendenmushi, who is Insect/Electric type. His evolved form is the sleek Kuwaganon, also of the same type. Then, we see the Chinese Dragon-inspired Jijiiron, who is Normal/Dragon. There’s a colourful fish Pokémon named Hagigishiri, who is Water/Psychic. Then there’s Aburii, a really cute Insect/Fairy Pokémon with little fluttering wings. Dogedemaru is a perennially happy-looking Pokémon of the types Electric/Steel.

Finally, we get to see two new forms for Zygarde, his 50% form and his Perfect Form, both of which are Dragon/Ground. Finally, we’re reminded of the game’s release date: November 18th, 2016. Let us know what you think of the trailer in the comments below!