Two new Pokémon to be found in Pokémon Sun and Moon have been revealed by CoroCoro Magazine, and one of them looks absolutely bonkers. The first Pokémon, revealed to the left on the scan below, is named Kiteruguma in Japanese. I recognise the ‘guma’ as rendaku for ‘kuma’, which means ‘bear’ in Japanese. Of course, the Pokémon itself is a bear of the Normal and Fighting type. 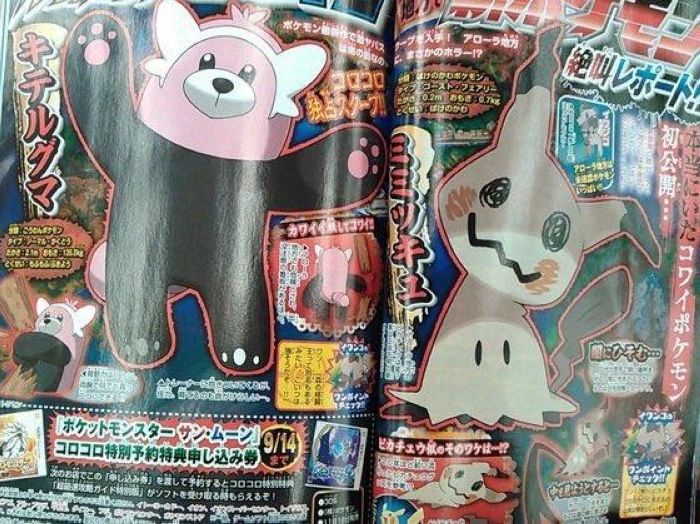 According to the flavour text included with the scan (courtesy Serebii), Kiteruguma can break anything in two and is supposedly so strong, simply raising him “puts your life in danger”. So much for his adorable face. He has the abilities Fluffy and Klutz, but we don’t yet know what they do. That’s it for the bear.

Now for the really freaky stuff, have a look at exhibit B, to the right. That’s Mimitsukiyu, who is a Ghost and Fairy type Pokémon. His ability is “Disguise”, presumably because he likes to stay hidden under a piece of cloth. This Pokémon hates the sunlight, and supposedly, if you remove the cloth from the Pokémon, you will be afflicted with an illness. If you ask me, just looking at him feels like being afflicted with an illness.

What do you think of these two new Pokémon from Pokémon Sun and Moon? What would you name them in English? Let us know in the comments below.