Have you been waiting for Pokémon Sun and Moon news? So have we. It seems that the wait has gotten just a teensy bit shorter, however. While we previously were led to believe that the April issue of Japanese magazine CoroCoro would include interesting scoops on Pokémon Sun and Moon, this turned out to not be the case. CoroCoro says, however, that next month’s scoop will be substantial. 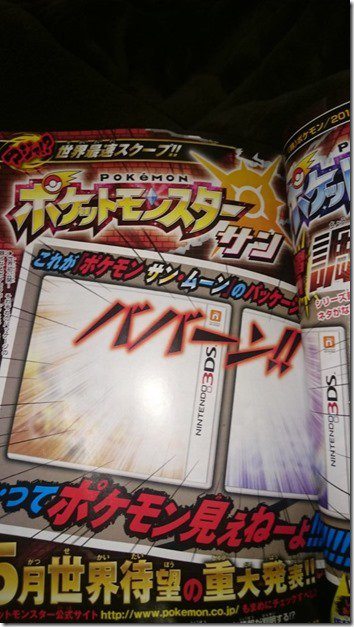 The issue even appears to be making fun of itself, by saying (in the red letters below the obscured box art), “What the, we can’t even see the Pokémon!!!!!!” At least they’re self-aware, we’ll give them that. Of course, that we’ll get exciting Pokémon Sun and Moon news is something we were promised before, and that turned out to be a dud, so we have absolute reason to believe that might be the case again.

Pokémon Sun and Moon is scheduled to release in holiday season 2016, exclusively for the Nintendo 3DS. This year marks the 20th anniversary for the Pokémon franchise as a whole, and Pokémon Sun and Moon will be a part of the celebrations. Apart from this, Nintendo is also involved in Pokémon GO, a mobile game featuring Pokémon capture, battle and trading.