Pokémon Red, Blue and Yellow versions will be coming out on Virtual Console for the 3DS later this month. These, ladies and gentlemen, are the very games that began the Pokémon franchise 20 years ago and they’re just as playable today (unless you’re allergic to black-and-white). 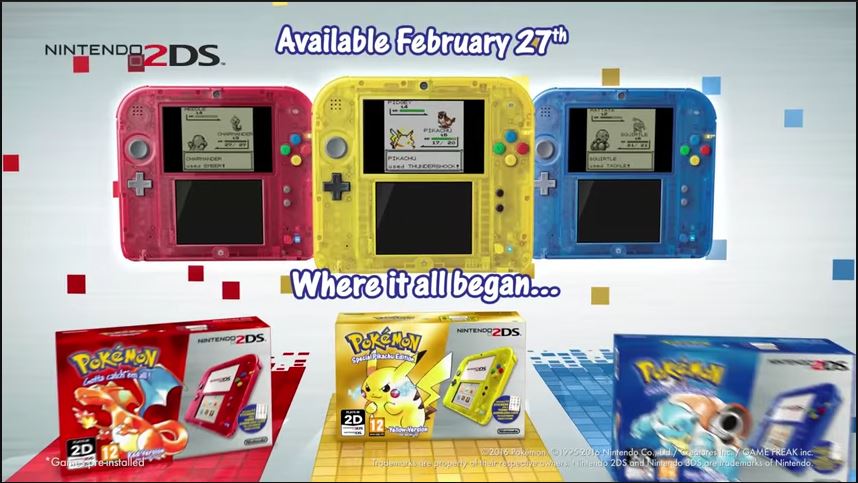 Thanks to a brand new trailer, seen below, you can take a trip down the memory lane, or, if you weren’t around 20 years ago, discover the original Pokémon games that spawned a franchise that would take the world by storm not long after.

Pokemon Red, Blue and Yellow will hit the 3DS via the eShop on February 27. That date actually marks the exact 20th anniversary of the original games’ release in Japan, for the original Game Boy. They’re also available bundled with the 2DS, as visible in the screen capture seen above. In Japan, an additional Pokémon Green bundle will also be available (fun fact: Pokémon Red was paired with Green in its original Japanese release, but Green was replaced by Blue for the international release).

Interestingly, the games will not feature Restore Points, which means you will have to embark on your quest to catch ’em all without the aid of save states. Yes, you will have to play these games the old-fashioned way.

The Pokémon Company has tons of plans for the 20th anniversary of Pokémon, from the release of Pokémon GO to work on a “major project” that we believe is likely Pokémon Z. There’s also the upcoming movie later this year, starring recently revealed Pokémon Volcanion and Magearna.