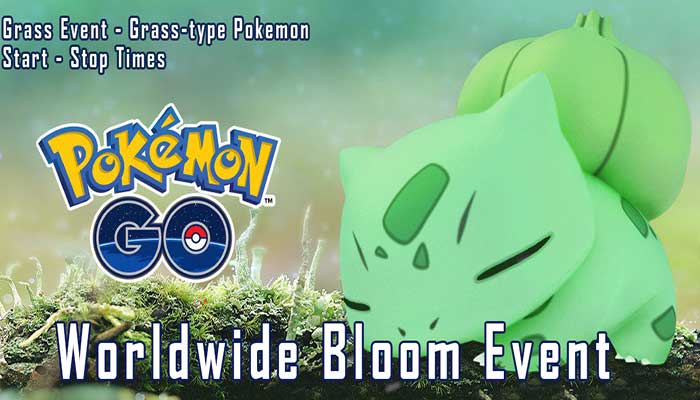 The new Pokemon Go event is scheduled to start on May 5 and it will remain available until May 8th, 2017.

In the new Worldwide Bloom event, all the Grass-type Pokemon will be available in more numbers than ever before. This means that the fans will be seeing a lot of Grass-type Pokemon very soon. On may 8th, the game will return to its former state at the end of the event.

It’s just a speculation that suggests that if this recent event is anything like the previous Water Festival, it’s possible that the fans will have a Shiny Pokemon released into the wild as well.

Following is the full list of the Grass-type Pokemon

In the above Grass-type Pokemon lineup, Bulbasaur, Ivysaur, Venusaur, and Exeggutor are from the Gen-1. However, Chikorita, Bayleef, and Bellossom are from Gen-2.

Based on the information provided until now, the players will be able to capture Bellossom and Celebi during the time of the Worldwide Bloom Event. However, it seems a bit unlikely as the Bellossom requires a Sunstone. After that, it’ll be able to evolve from the Gloom. Similarly, the Celebi Pokemon is a rare Pokemon.

The grass event has also brought in some exciting bonuses and rewards as well, the extension of Lure modules is one of them. In addition, fans can also use the Pokemon Go AR camera to document all the happenings during the Worldwide Bloom Event. In a similar way, fans can also now use the #PokemonGo for sharings on the Social Media.

Hopefully, this new event will be offering similar rewards and the level of satisfaction that the previous events offered. Though this event is coming in for a very short time, but it is something of a very big scale. So, all the fans will definitely enjoy it.