The most recent update from Niantic for Pokemon GO brings a new feature called Sightings. For select users, Niantic has also made available an enhanced version of Nearby tracker.

Sightings contain a list of Pokemon along with green grass behind them. It means these Pokemon are available within 200 meters of the player. Creatures that move of this range are automatically removed from list. Even Pokemon that de-spawn disappears from the list. The Sightings list refreshes every 10 seconds to display the most recent information. 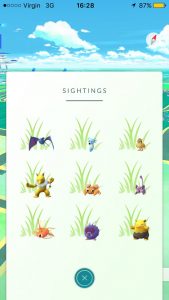 The new Nearby tracker contains a list of Pokemon with a backdrop of PokeStop for each one of them.  Players can simply tap on the PokeStop they wish to go and it will bring up details on how to reach there. 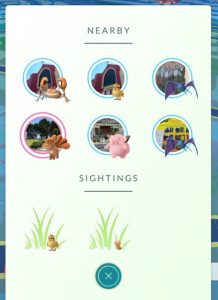 The View button that becomes by tapping on a PokeStop to view the location and move towards it by following pink paw icons. Pokemon may not always show up at the PokeStop but they won’t be too far from it.

If the Pokemon disappears before reaching the PokeStop, the game will notify the player that the Pokemon is no longer available at the spot. Players have been able to try the new Nearby tracker have stated that it works perfectly.