Pokemon Go is currently the most trending app on both Android and iOS. Millions of players are playing it every month and majority of them are trying to fulfill their long-lost dream of becoming a Pokemon master. However, as the game allows players to capture around 151 Pokemon (most of them are not available in the game yet), you must think which Pokemon you should catch first. Now, thanks to GamePress, you can know on which Pokemon you should invest your time in.

The list compiled by GamePress ranks Pokemon based on their CP or Combat Power. Though we all know that CP isn’t the only thing used to describe how well a Pokemon will perform in battle, but in many cases, the higher the CP of your Pokemon, the better he has the chance of surviving against an opponent in a Gym. Below is the list of the best Pokemon in Pokemon Go with the highest CP.

Best Pokemon in Pokemon Go with the highest CP 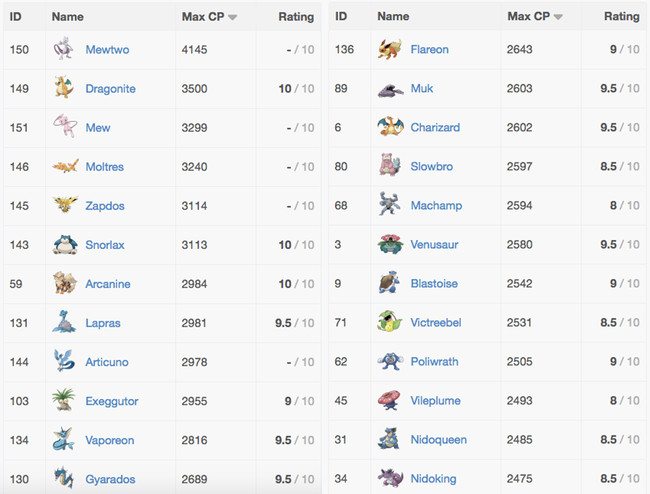 As you can see above, Mewtwo currently has the highest CP (4145) in Pokemon Go, so you have a better chance of winning against your opponent in the gym if you use him. However, as players are currently unable to get their hands on Mewtwo, they can use Dragonite who has a CP of 3500 and ranks 2nd in the game in terms of CP.

The full list of Pokemon with the highest CP in Pokemon Go can be seen on GamePress. However, if you don’t trust this list, you can check the CP of your Pokemon manually. To do this, you have to open up the details of your Pokemon and from there, you can see a semi-circle on the top of the Pokemon. If that semi-circle reaches the far right, it will mean that your current Pokemon is at its max CP.

Pokemon Go was released on July 6, 2016 for Android and iOS. The game is developed by Niantic and published by The Pokemon Company. Be sure to check out how you can throw a Pokeball properly in Pokemon Go before you leave.

Let us know what you think about this list in the comments below.