It is a known fact that the Pokemon GO has already taken the world by storm. With the overwhelming response, Niantic, the official game developer has pulled off the game roll out from some countries such as UK, Newzealand, etc. This is mainly because of the server issues and the company is apparently working on the fix to get back. However, the game is still in the initial release version and the new augmented-reality game is afflicted with many bugs such as the players stuck in a Gym and trying to get the trainer working, some of them unable to find the Pokestops, application crashing frequently, etc. That said, the company hasn’t provided any information related to these bugs, but we got some tips for you to get back to the game if you experience the same errors and issues.

It will be hard to find why the app crashes sometimes even if you are doing everything fine. That said, the application crashes for numerous reasons and it is to be noted that a spinning Pokeball will appear and disappear in the Google maps-Esque layout. If the spinning Pokeball appears, it meant that the game is syncing with the servers and the servers are refreshing to keep you in contact with the game.

You might face many difficulties if you are using a less speed internet connection. As the game refreshes for every 15-30 seconds, it must be noted that you are on a good network connection when this refresh happens. If your network reception is not that great, then you might notice a frozen gameplay screen, which indicates that the game is trying to connect with servers. If your device reconnects with the internet, then the game will resume. If you device failed to achieve the network connection, the game will crash and you need to restart the game.

Sometimes, the game won’t even resume even after achieving good network reception. This is mainly due to the game lost the connection with its servers. This can be fixed by restarting the game.

The above mentioned are some of the frozen app errors, which can be apparently fixed by restarting the game.

How to Stop Pokemon GO Drain Your Battery

This is a common problem with all users as the game is hogging the battery immensely. That said, the to be always turned GPS is the major culprit for this problem. We have already covered some of the data saving tips while playing the game and here are few ways to stop Pokemon GO from draining your battery.

1. Turn on the battery saver option in Pokemon GO: Many will not be knowing about this feature. The Pokemon GO itself comes with an integrated battery option, which needs to be turned on by heading over to the game settings. When the battery saver mode enabled, the refresh rate of the servers lowers down, the screen brightness will be decreased. The battery saver feature does not bring a drastic drain change but helps at times. 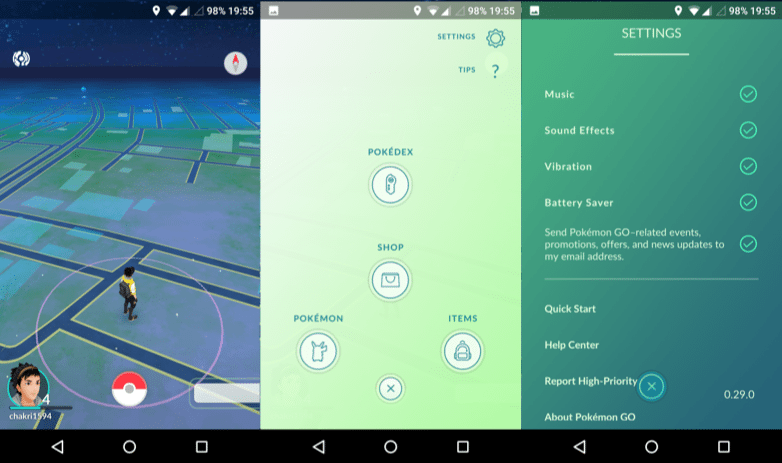 2. Turn off the Augmented Reality: Being touted as an augmented-reality game, turning off this feature will not excite many out there. But, by doing this you can experience a better battery life. You can also read our battery life tests in real world usage for both Android and iOS.

How to Fix the Server Related Errors

When we first tried to play the game, we are plagued with several server errors, which didn’t even allow us to play the game for an entire day. But, the servers has improved a lot in the last couple of days. That said, some of you might be still facing the server related errors and the message everyone getting is “Our servers are experiencing issues”. So, there is no fix for this, but you can certainly kill and restart the game, which might help to some extent.

Having said that, these are some of the fixable common errors faced by Pokemon GO players all over the world. And, Niantic has officially stated some issues and how to fix them on their blog, you can head over to Niantic’s official blog by clicking here.