Pokemon GO has been a sensation. The game has recently thumped the popular dating app, Tinder, and about to reach Twitter within few days, in terms of daily active members. So, we hope you are playing the Pokemon GO for a few days and might have reached the Level Five. After reaching level five, you need to join a Gym and a team to proceed further into battles. You can check out our guide on How to Win Gym Battles to get an idea about Gyms.

The basic motto of the game is to collect all the Pokemon and battle with others, however, each Pokemon has some Type Advantages, Movesets, Evolution type of things which each player need to understand before heading to a battle. So, in this article, we will guide you through the Pokemon GO Battle Guide.

What Are Type Advantages And How They Work

Many people will be familiar with Type Advantages. Each and every Pokemon has a typing or two, which basically is the advantages and disadvantages of that particular Pokemon. So, when heading over to a Gym Battle, you must take six Pokemon with you to battle with the opposite Gym member. And, for this, you need to know your six Pokemon’s Type Advantages.

For example, let’s consider a Fire-type Pokemon, which are relatively strong against Grass, Bug, Steel, Ice types. And, when it comes to Bug Types, they are weak against Flying, Fire and Rock type attacks. It must be taken care by the trainer and analyse the opponent’s strength when heading over to a battle. You can check the all the Pokemon’s Type Chart by clicking this link.

Movesets to Control The Pokemon in Battles

When you’re ready to the battle, you can see three commands on the battle screen, which are the basic Movesets available for all the Pokemon. The Movesets are divided into three Moves: Fast Attack, Dodge Attacks, and Special Attacks.

1. Fast Attack: The Fast Attack is a basic attack of the Pokemon with which you can attack the opposite Pokemon. The more you attack the rival Pokemon, the faster your Special Attack meter fills.

2. Dodge Attack: While performing the Fast Attack, you can swipe left or right to perform the dodge attacks.

You can know more about each individual Pokemon Moveset powers by visiting this site: Serebii

“Each Pokémon can have one of two standard attacks and one of three special attacks. While these can’t change, when you evolve a Pokémon you will get the move in the same coded slot for the evolution. So if you have a Rattata with Tackle and Dig, when it evolves it will replace Tackle with Bite but keep Dig, whereas if its standard move was Quick Attack, it would keep that move.” stated by Serebii.

Now You Can Use Multiple Pokemon

As said earlier, each Pokemon comes with two default moves, unlike other Pokemon games which rather came with four moves. Pokemon GO makes it even difficult and you can carry multiple Pokemon with same species.

The stardust and candies eventually help in levelling up and evolving the Pokemon, however, you can carry two Pokemon with similar species to the battlefield and the trainer does not even know how the Pokemon evolves and with what Movesets it evolves.

For example, take a look at the following screenshot as the Pokemon Evans is available as Multiple Pokemon. One Evans has special Moveset as Sludge Bomb and the other one has Gunk Shot. 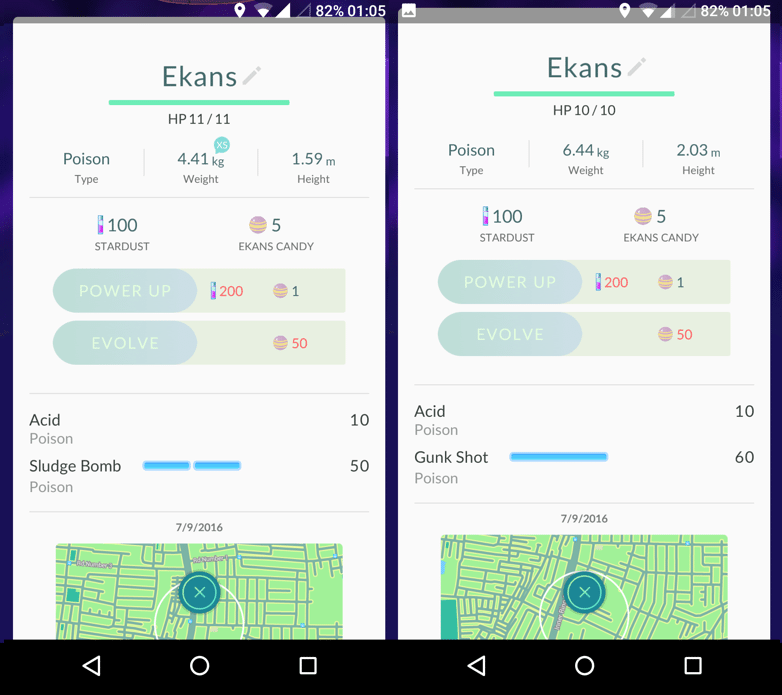 So, the Pokemon GO offers an advantage in carrying two Pokemon with similar species to the battlefield. You can choose the Moveset according to the attack posted on you.

Hope you find this Pokemon GO battle guide helpful. Share your thoughts in the comments below.