MobiPicker
Games Console Gaming Overwatch: Tracer’s Sexy “Butt” Pose Removed, Starts Controversy
Share on Facebook
Tweet on Twitter
Deal Alert: 49% Off on ExpressVPN
Touted as #1 VPN in the world, ExpressVPN is now offering 49% off & an additional 3-months of service on its annual plans.

Overwatch’s community is currently in a bit of a controversy after Blizzard decided to axe one of Tracer’s victory poses. The victory pose in question, “Over the Shoulder” left little to the imagination, showcasing Tracer’s ample posterior. Take a look at it below and see for yourself (because obviously you were going to google it otherwise). 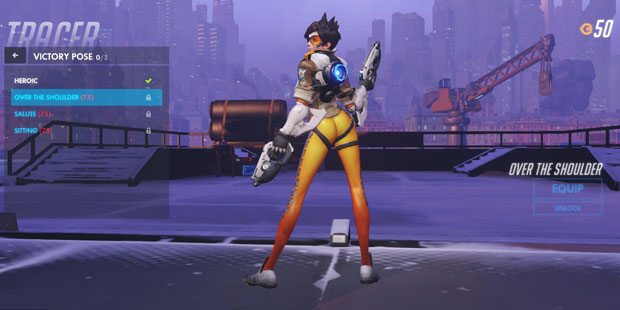 This all started with a post on the community forums by a user named Fipps, who was of the opinion that the pose is “over sexualized” and that the character’s personality is taking a back seat in favour of being “another bland female sex symbol”. The user is keen to note that they take no objection to Widowmaker, another character in the game who happens to flaunt her sexuality.

Following 30 pages of back-and-forth on the forum, Overwatch game developer Jeff Kaplan said this: “We’ll replace the pose. We want *everyone* to feel strong and heroic in our community. The last thing we want to do is make someone feel uncomfortable, under-appreciated or misrepresented.” This did not go well.

A section of the community took to shaming Kaplan, which should not be surprising if you’ve been following the industry over the past couple of years. The controversy continues to rage across the Internet at present as fans debate whether or not this is an instance of censorship (hint: it’s not), but Blizzard has stood its ground.

Overwatch is currently in beta, and will release on May 24, 2016 for the PC, PS4 and Xbox One. What do you think of Blizzard’s creative decision? Let us know in the comments below.