OUKITEL is another small OEM from China that is slowly trying to make it big in the international market with high-end powerhouse smartphones at affordable prices. But the one thing that this OEM is trying to make clear from the beginning is that OUKITEL smartphones are made for rough usage and can survive easily even after taking a lot of beatings in different ways. It was only a few weeks ago when the OUKITEL K4000 had made it into the headlines for surviving power-drilling and hammering. A lot of other smartphones from the company have been subjected to such tests, but the latest one is a bit amusing. 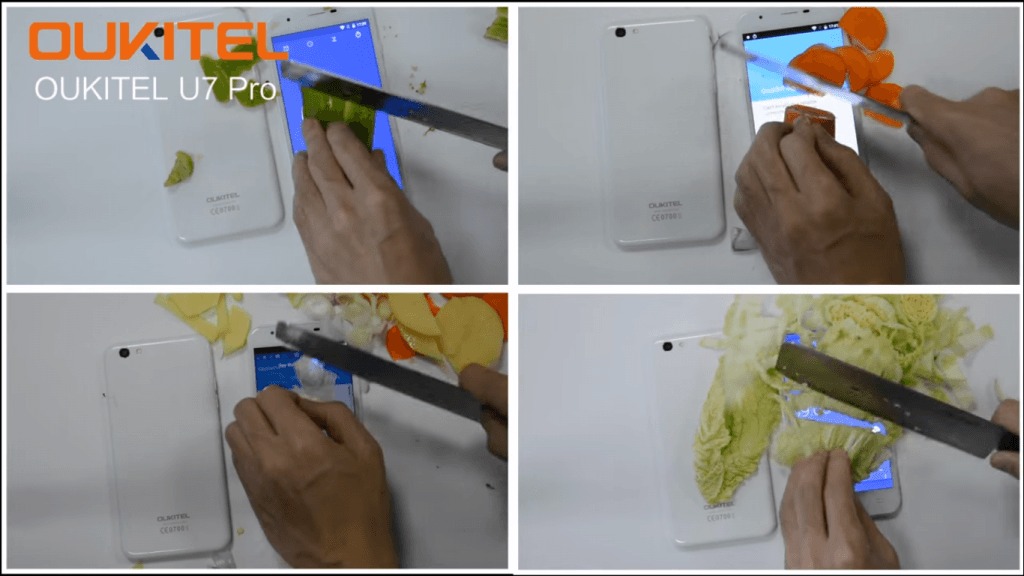 OUKITEL has released a new video on its YouTube channel, in which it wants to show how tough the OUKITEL U7 Pro’s screen is. In the video given below, the 5.5-inch screen of the phone is tested under a packing knife, and it emerges victorious. The video shows a lot of vegetables being cut with a sharp knife, with a few OUKITEL U7 Pro smartphones acting as the chopping board. The screen survives the amusing act without any marks, scratches, or damages over it. OUKITEL is surely trying to grab all the attention that it can!

The OUKITEL U7 Pro gets a 5.5-inch 2.5D curved glass display with a resolution of 720 x 1280. There’s a MediaTek MT6580 SoC under the hood that contains a 1.3GHz quad-core CPU. The phone also comes with a built-in projector, which can beam your videos, photos, or documents on walls or ceilings at 50 lumens.