Chinese smartphone maker OUKITEL, known for its budget and midrange handsets with powerful specs, released several new models at the Mobile World Congress (MWC) 2017 in Barcelona, Spain. Among the newly released handsets are the OUKITEL K10000 Pro, K6000 Plus and U20 Plus jet black version. 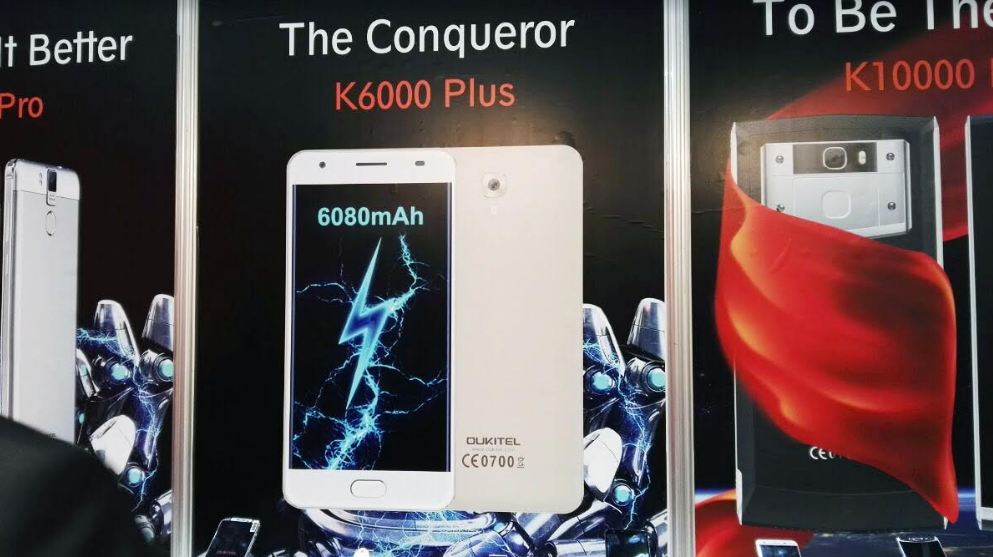 The poster in OUKITEL’s MWC 2017 booth bragged the K10000 Pro as “To be the king”. The device comes with a super-massive 10100 mAh battery and a 12V/2A flash charger. At 5.5-inch, the display size is still the same as its predecessor, but the resolution has been upgraded to a higher 1920 x 1080p. Under the hood, the device carries MediaTek’s MT6750T octa-core processor along with 4GB RAM and 32GB ROM. The 16MP rear-facing camera is among the best in its league, whereas the 8MP front camera also offers an impressive image and video-call quality.

Another exciting pair of devices the company showed off at the event includes the K6000 Plus and K6000 Pro, the former being the more powerful between the two. OUKITEL calls 6000 Plus “The Conqueror”, implying that it is likely to feature a more powerful chipset, memory, and battery combo than the K6000 Pro.

As you probably know, the U20 Plus was already released last year and has remained one of OUKITEL’s commercially most successful product till date. A new variant of the handset — OUKITEL U20 jet black with 5.5-inch SHARP FHD display was also released at the event. The device is powered by an MT6737T quad-core chipset, along with 2GB of RAM and 16GB ROM.  The U20 Plus jet black version is currently available on online stores at a flash sale price of $94.99.