Xiaomi has yet again proven itself as the trendsetter for the smartphone industry. Ever since the Mi MIX 2 has gone official, a number of Chinese smartphone makers have followed suit and have launched a phone with a design similar to the Mi MIX 2. Even its name has also been adopted. The OUKITEL MIX 2 is one such device that comes with really thin bezels and dual cameras. 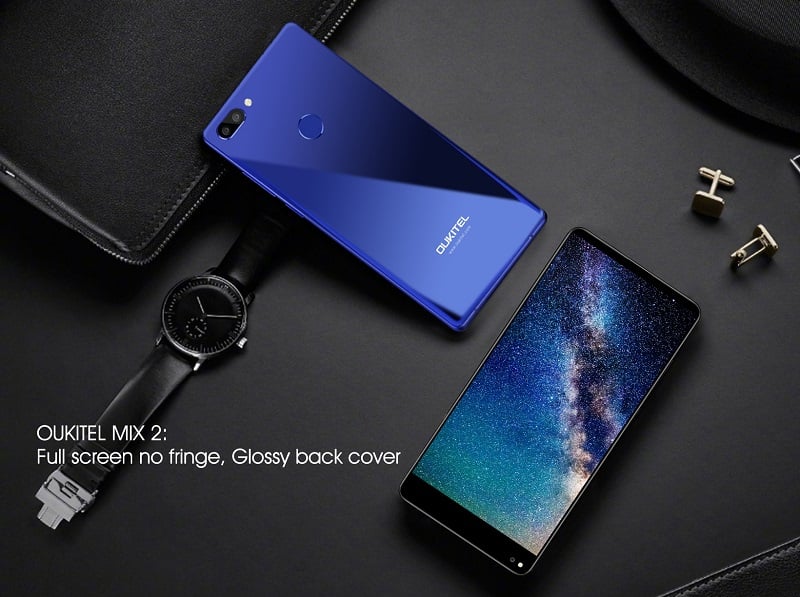 OUKITEL has launched a couple of phones – OUKITEL K8000 and OUKITEL K5000 – in the recent past that had their own USPs. On the other hand, the OUKITEL MIX 2 has its design as the USP with razor-thin bezels on the front and a glass finish on the back.

As you’d expect, there is an 18:9 display on the front measuring 5.99-inches and a resolution of 2160 x 1080. This is an FHD+ display and has 10-point touch support. Under the hood, you will get a Helio P25 octa-core processor and has a RAM capacity of 6GB. The internal storage is 64GB which can be further expanded up to 512GB.

The primary camera on the phone has dual sensors of 16MP and 2MP, while the front camera is of 8MP. You will be able to record 4K videos with this phone too. For charging and data syncing, there is a Micro USB port and there is no Type-C Port on this phone. Thankfully, the phone still retains the headphone jack. The fingerprint scanner on the phone sits on the back, right in the centre.

To support that massive display, the company has included a 4080mAh battery that should last you through a normal day. Plus, the included 9V/2A charger should get the battery charged within minutes. OUKITEL will make the MIX 2 available in three colours for a price of $299.99. You can also save a few dollars by way of coupon codes available on OUKITEL’s official website.