MobiPicker
Mobiles Android OUKITEL K6000 Plus Now Available for $167 Through Exclusive Flash Sale on...
Share on Facebook
Tweet on Twitter
Deal Alert: 49% Off on ExpressVPN
Touted as #1 VPN in the world, ExpressVPN is now offering 49% off & an additional 3-months of service on its annual plans.

The OUKITEL K6000 Plus smartphone from March is an attractive offering from the brand. Launched as a successor of Oukitel K6000 from 2016, the K6000 Plus comes with better specs and features. OUKITEL is now running a new flash sale offer with AliExpress to sell it for just $167 along with a free gift.

The USP of the OUKITEL K6000 Plus is its gigantic battery of 6080mAh capacity that is equipped with 12V/2A fast charging. With a mammoth battery inside, the K6000 Plus can easily last for over 3 days.

The company says watching full HD videos throughout the day with highest volume setting and maximum brightness, the battery of the phone can exhaust in a day as the display consumes a lot of battery juice. However, with rapid charging onboard, charging the OUKITEL K6000 Plus for 100 minutes will allow the phone to fully charge again.

Its rear-facing camera is of 16-megapixel and on the front, it houses an 8-megapixel snapper. Both the cameras are available with no interpolation. The phone is running on Android 6.0.1 Marshmallow OS. 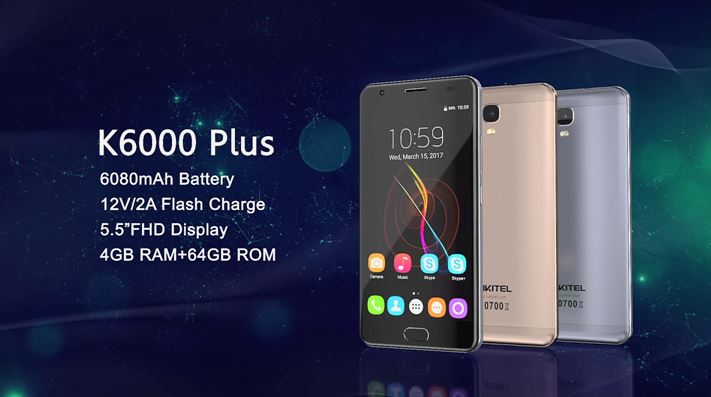 A reliable source has revealed that a new software update is going to arrive for the OUKITEL K6000 Plus to bring improvements to camera performance along with smoother user experience across the OS. Users can manually check for the update on the phone. The original ROM will also on OUKITEL’s official Facebook page.

The new flash sale which provides customers with a free gift bag of accessories worth $20 is exclusively available at OCBM store on AliExpress. The flash sale that started from May 17th, will end on May 24th.