China-based smartphone manufacturer OUKITEL seems to be on quite a roll. Following the largely positive feedback for the U20 Plus, the company is rolling out C5 Pro, another budget smartphone with powerful specs.

OUKITEL claims that the C5 Pro will be the cheapest 4G LTE smartphone with 2GB RAM and 16GB ROM through the foreseeable future. The handset is powered by Android 6.0 Marshmallow out of the box and it features a 5.0-inch HD capacitive touchscreen with 720 x 1280p resolution. 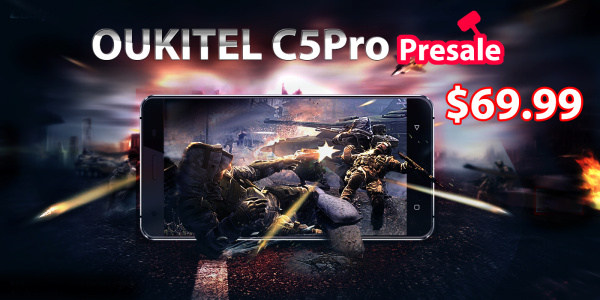 The 2.5D curved design alongside a high-quality metal frame gives the device a more expensive look than it actually is. In addition, Oukitel also claims that the display on the C5 Pro is anti-mesh and much tougher, giving it capable of withstanding rough handling.

To celebrate the Chinese new year, OUKITEL has announced a new sales event that will see the C5 Pro being available for only $69.99 from Jan 10 to Jan 17. This undoubtedly gives the handset the right to call itself one of the most affordable 4G LTE smartphones with 2GB RAM ever. As for availability, the device is currently available only through OUKITEL authorized stores.