The Chinese manufacturer OPPO has announced a new variant of the R7, the R7 plus. The R7 was first released in May 2015 at around $400. The new variant comes almost with the same internal specifications with just little RAM and memory upgrades and is priced at RMB 2,999 ($465) for the China Unicom model while carries a tag of RMB 3,299 ($515 approx) for the international model. 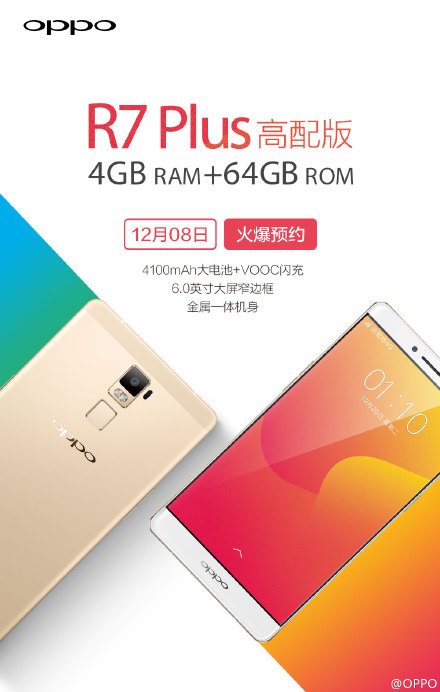 The OPPO R7 Plus is powered by the same Snapdragon 615 chipset which also powers its predecessor. It sports a bigger 6.0-inch AMOLED display at 1080 X 1920 pixels resolution. It packs 4GB of RAM along with 64GB of internal memory, a considerable upgrade over the R7. Carrying a rear camera of 13MP and selfie shooter of 8MP, it offers the same camera specs as the OPPO R7 does. The device has a battery with capacity of 4,100mAh (with VOOC) as compared to just 2320mAh of the R7. The phone runs Android Lollipop v5.1 out of the box and is available in Golden color.

Connectivity options include dual SIM (GSM and GSM), Wi-Fi, GPS, Bluetooth, 3G and LTE. Both Nano-SIM and Micro-SIM is supported. The OPPO R7 plus comes fitted with a variety of sensors – Proximity sensor, Ambient light sensor, Accelerometer, and Gyroscope.

The smartphone is currently available for pre-order and will be shipped in December itself.