MobiPicker
News OPPO Neo 7 Goes Official with 5″ Display and SD 410 Chipset
Share on Facebook
Tweet on Twitter
Deal Alert: 49% Off on ExpressVPN
Touted as #1 VPN in the world, ExpressVPN is now offering 49% off & an additional 3-months of service on its annual plans.

OPPO today unwrapped a new smartphone, dubbed Neo 7. It runs Android 5.1 Lollipop based Color OS 2.1, and features a mirror-like finish on the back. Price and availability details are not yet revealed, but given to specs, the phone seems quite affordable. Also, the official product page confirms that there will be a US version, Indian version, and an International model for rest of the regions. 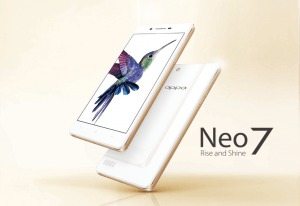 The OPPO Neo 7 features a 5-inch TFT display with a resolution of 540×960 pixels, and comes with dual-SIM (micro + nano) and LTE support. The phone is powered by the Qualcomm’s Snapdragon 410 chipset with a quad-core processor, clocking at 1.2GHz. It has a 1GB of RAM, 16GB expandable storage, and a 2420mAh battery.

It will be available in black and white colour choices. Any takers?