MobiPicker
Android Applications Opera Browser 37.0 APK Download Released With Push Notification Support
Share on Facebook
Tweet on Twitter
Deal Alert: 49% Off on ExpressVPN
Touted as #1 VPN in the world, ExpressVPN is now offering 49% off & an additional 3-months of service on its annual plans.

Opera Browser is one of the most downloaded internet browsers from the Google Play Store for Android devices. It is smooth, simple, light, and fast and provides the best internet browsing experience on Android. Unlike many other browsers, it does not lag or slow down and feels very snappy, and its simple features are all you need. 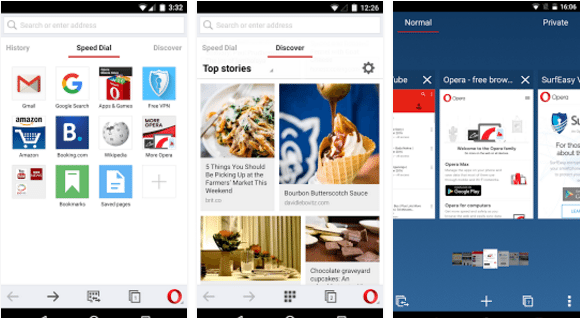 Opera Browser APK download has been updated today to version number 37.0. The new APK file weighs 32.18 MB and can be installed on tablets and smartphones running on Android 4.1 and above. The new update comes with bug fixes to make the app more stable and smooth. Also, it adds support for Push Notifications and changes the rendering of Speed Dial icons. Other than that, you won’t notice anything new in this update.

Please remember that this is a update update, so it is possible that it might have some unfixed bugs and might not be stable. It might crash on some devices and cause small issues on others, but it is still safe to try for those who like testing new releases. If you are one of them, you can download Opera Browser APK latest version for Android from APKPure.com.