Thanks to the launch of OnePlus 2 this year, the company had announced that it it will be coming out with another device before the end of 2015. We think that the new device might be the OnePlus X and will be launched on 29th October, as can be derived from the teaser released by OnePlus a few days ago. The big ‘X’ in the teaser poster hints towards the launch of the OnePlus X, which has been actively leaking from a few weeks now. The TENAA website has already certified the OnePlus X and the specifications of the phone have already become public. 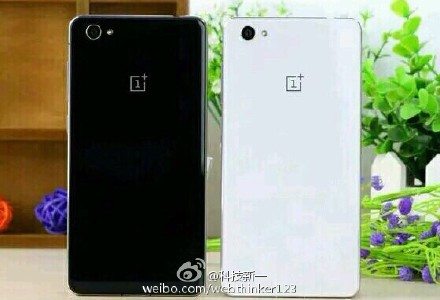 However, the news of the day is that a fresh real life photo of the OnePlus X has been leaked on Weibo, and the picture displays a back as well as a white variant of the phone. Looking at the photo, we think the OnePlus X will be featuring a metal and glass design, with the both front and back covered with glass. The device seems to be carrying a metal trim all around its edges, while the OnePlus logo stands out in glorious contrast at the rear panel. The speaker grills might be placed at the bottom of the phone and between them might sit a USB Type-C port.

In case you have skipped the previous news about the OnePlus X specs, the phone will carry a Full HD 5-inch display, 3GB RAM, and 16GB expandable memory. A quad-core Snapdragon 801 chipset will power the device, while an Adreno 330 GPU will see to the graphics. A 13MP rear and 8MP front camera will quench your photography thirst, and a 2450mAh battery will power the Android 5.1.1 phone with OxygenOS running on it. The 4G LTE-enabled OnePlus X might come at a price tag of about $220 in China. So almost all the facts have been leaked and only the official launch is what remains of the OnePlus X.