It seems we won’t have to wait for the official launch of OnePlus 5 to learn about the device. With tons of leaks appearing just before the launch, almost nothing is left to the imagination. Right after the leaks of press renders, a new leak has appeared confirming the existence of OnePlus 5 8GB variant. 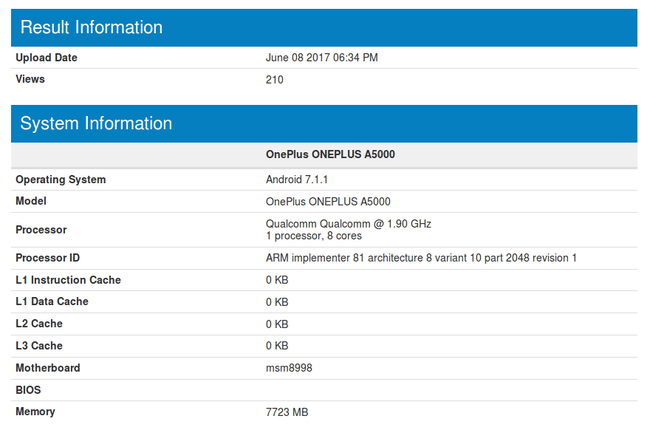 The latest leak comes courtesy of a benchmarking portal, Geekbench. It shows the “Flagship Killer” offering from OnePlus listed with 8 Gigs of RAM. That’s an insane number and makes the OnePlus 5 only second mobile to feature it after Nubia Z17 launched a few days ago.

Rest of the listing includes the known configuration of Qualcomm Snapdragon 835 chipset and Android 7.1.1 Nougat OS.

Also yesterday, the official handler for the company tweeted the back of smartphone showcasing the dual-cameras.

In other news, OnePlus 5 Indian pricing is said to be unearthed. According to True-Tech, the OnePlus 5 will launch in two variants of RAM and storage – 6GB/64GB model at INR 32,999 and 8GB/128GB model at INR 37,999 (~$591). OnePlus has been increasing the pricing of its latest model ever since OnePlus 2, so it won’t be surprising if this rumor turns out to be true.

The OnePlus 5 will be announced on June 20 in China, and the Indian-specific event will take place on June 22. Let’s hope OnePlus has something left for the official unveiling.