So finally, the long-awaited OnePlus 3 is going to be launched tomorrow and will probably hold up the company’s flagship killer name this year too. This phone is getting a new design and is going to be a humongous upgrade from the OnePlus 2. As with all the previous OnePlus flagships, this upcoming smartphone will carry a value-for-money price tag. 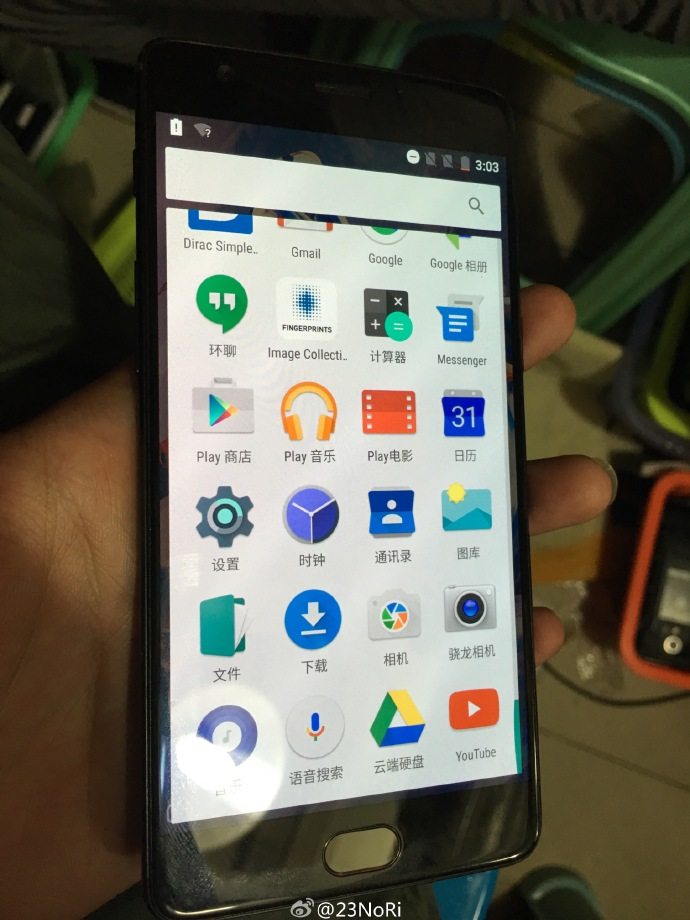 Thankfully, the OnePlus 3 will not be sold via the company’s much-criticized invite system that was applied on all the previous phones from the company. Instead, this time the flagship will be sold directly via online retailers without any invite system. We can’t comment anything on the possibility of flash sales though. The OnePlus 3 launch event tomorrow is going to be a great unveiling and can be witnessed in VR using VR headsets.

Meanwhile, just before the OnePlus 3 live launch event, some new images of the phone have leaked out on China’s microblogging site Weibo. These new photos show the front and rear of the phone and also show that the device is running OxygenOS 3.0 on top of Android 6.0.1 Marshmallow. There is the fingerprint sensor-cum-home button on the front with the screen beautifully tapered at the edges.

The OnePlus 3 specs as suggested by the latest rumors and leaks include a 5.5-inch Full HD screen and Snapdragon 820. The phone will get 4GB and 6GB RAM variants with 32/64/128GB storage options.There will be an 8MP front camera and a 16MP rear camera. The device will come with a USB-C port for charging and data transfer and will be juiced by a 3450mAh battery.

So the launch event of the OnePlus 3 is going to be held tomorrow in China at 10 AM local time, and we will be bringing you the live updates here. This post will be updated with the latest details as the event progresses, so bookmark this page and keep checking it.