One Piece chapter 873 is out and fans are currently eagerly waiting for the chapter 874 to arrive. The previous few chapters of the series have been really exciting as they have focused on how the alliance managed to escape from the Big Mom Pirates. Although they still haven’t properly escaped as the Big Mom Pirates are after them, but they are at least on the run. In the previous chapter, Perospero managed to send Big Mom after the Straw Hat Pirates by lying to her that they have the cake. After threatening Perospero that she will kill him if she finds out that he is lying, Big Mom summoned Zeus and went after the Straw Hats. At the end of the chapter, while the Straw Hats were on the run, an angered Big Mom confronted them and told them to hand over the cake.

So without any further due, here is what happened in the previous chapter along with what is expected to happen in One Piece chapter 874.

In the previous chapter of One Piece, Katakuri was seen preparing to chase down the Sanji Retrieval team himself. However, just when he was about to leave, the Big Mom pirates were approached by Big Mom. To make things even worse, it was revealed that Big Mom is currently on a rampage because of her craving for the wedding cake. Worried that Big Mom might destroy the whole island, Perospero lies to her that the cake is fine but the Straw Hat Pirates stole it and took it with them. Big Mom then summoned Zeus and fled towards where the Straw Hats went after warning Perospero that she will kill him if he is lying. 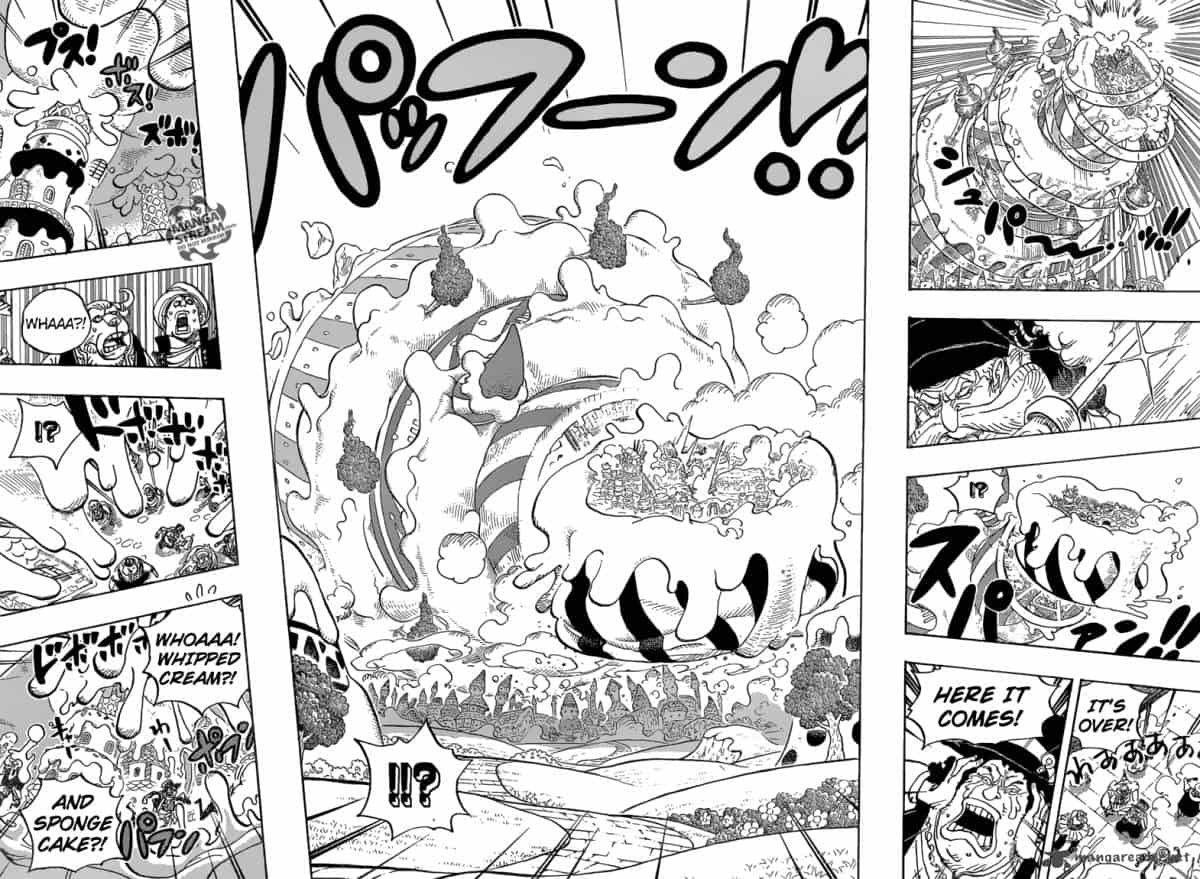 All of the Big Mom Pirates were relieved, but they were still worried, specially Perospero because he knew that Big Mom won’t find any cake and it would take him days to prepare a new cake. Katakuri then predicted that if Big Mom continues her rampage like this, the whole island will be destroyed. Pudding then arrives and tells Katakuri that she can make the wedding cake on Cacao Island as she has some reserved ingredients there. However, she told him that it will be possible only if Chiffon helps her. On the other hand, the Sanji Retrieval team forced King Baum to carry them, but they were soon confronted by an angered Big Mom who had wielded Napoleon in his sword form and she then demanded them to hand over the cake.

Now, fans are currently wondering what will happen to the Sanji Retrieval team in One Piece chapter 874 now that they have been confronted by Big Mom. It is hard to predict what will happen considering the fact that this is the first time Big Mom has been separated from her crew and is all alone. It is said that Sanji and Luffy might fight Big Mom, or there is a chance that someone else interferes in their situation. Whatever the case is, the next chapter of One Piece is definitely going to be an amazing one.