One Piece chapter 872 was just released and fans are now eagerly waiting for the next chapter to arrive. The previous few chapters of the series have been really interesting as they focused on how Luffy and the rest of the alliance got in a difficult situation while fighting the Big Mom pirates. And the previous chapter revealed how they were finally able to escape the Yonko after something really unexpected happened. And now, Big Mom is expected to go on a rampage again, meaning Sweet City is again in danger.

So without any further due, here is what happened in the previous chapter along with what is expected to happen in One Piece chapter 873.

One Piece episode 872 started with focusing on what happened to the Whole Cake Chateau after the Tamatebako exploded. All the citizens of Sweet City got shocked after seeing the explosion in the building, and they soon realized that its falling down. They all then started running away from the Chateau. However, the alliance regrouped and realized that they finally have a chance to escape. On the other hand, the Big Mom pirates were left in a shocked state after they saw what happened. Each notable member was seen trying to keep the place together. While the Big Mom pirates were trying to keep everything together, Caesar and the Vinsmoke family fled the alliance to another place. 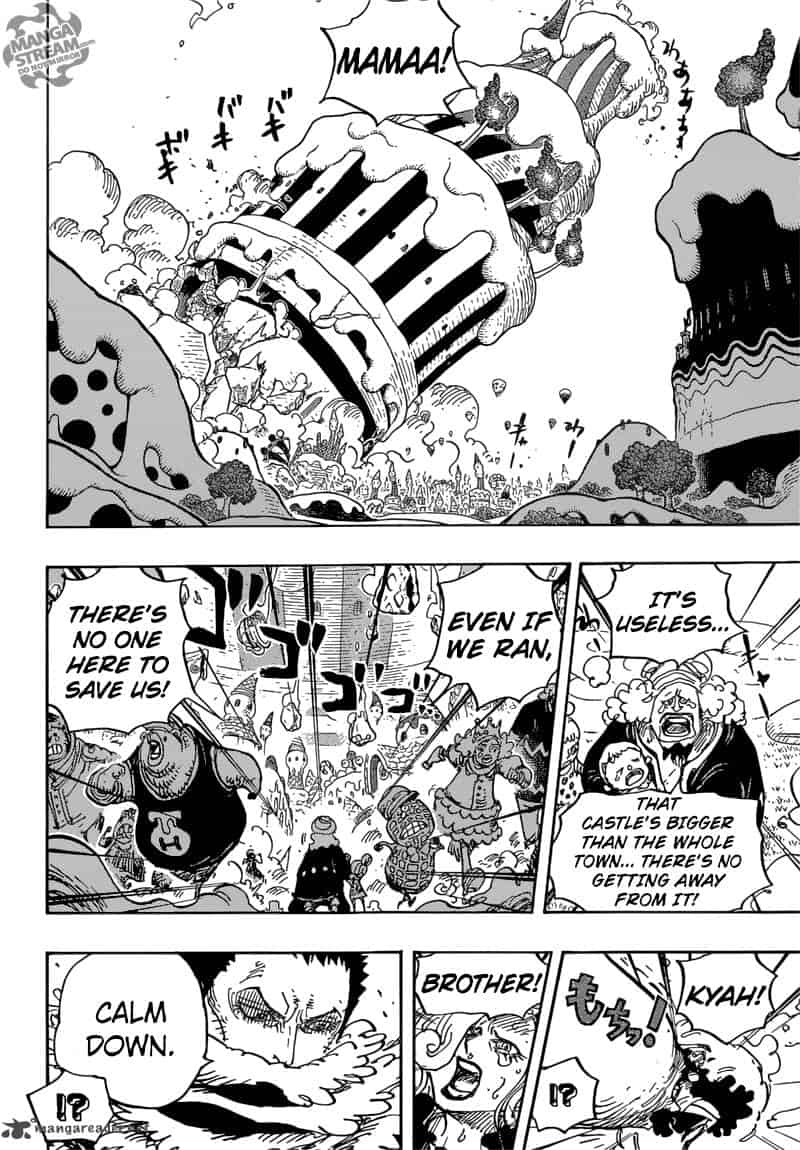 After successfully escaping from the situation they were trapped in for so long, Bege ejected Luffy and the rest of the Straw Hat Pirates from his body and decided to go his separate way. However, it is then revealed that thanks to Streusen, the Big Mom Pirates survived. Luffy then decided to leave the island, while Bege warned him about how the Big Mom pirates are going to come after them. Before leaving the place, Bege placed a sign pointing in the direction the Straw Hats went so the Big Mom Pirates can follow in that direction. Katakuri then created two groups, one to go after the Fire Tank Pirates, and one to go after the Straw Hat Pirates. Smoothie then told Big Mom that they will capture the invaders at any cost, but is left speechless after seeing that Big Mom’s eating disorder is coming back again.

And now, in One Piece chapter 873, Big Mom is expected to go on a rampage again. As we all know, she also went on a rampage at the start of the Whole Cake Island arc, and at that time, she almost destroyed Sweet City. If it wasn’t for Jinbe, Sweet City would have gotten destroyed. However, this time, even Jinbe isn’t going to be able to save the city from getting destroyed.

One Piece chapter 873 is currently expected to arrive on July 24, 2017. Let us know if you’re excited for it or not in the comments below.