One Piece chapter 871 was just released and fans are now eagerly waiting for the next chapter to arrive. The previous few chapters of the series have been really interesting as they focused on how Luffy and the rest of the alliance are trying to escape from the Whole Cake Island. The Big Mom pirates are currently looking for some sweet revenge, and they won’t be satisfied until they wipe out the entire alliance. However, the previous chapter ended with something really interesting, and the alliance might finally have a chance to escape.

So without any further due, here is what happened in the previous chapter along with what is expected to happen in One Piece chapter 872.

In the previous chapter of One Piece, Luffy, Sanji, and the Vinsmoke family decide to clear the way for Caesar to escape from the roof with Bege and the rest of the alliance in his hands. While Caesar was trying to escape, one of the Big Mom pirates created a candy wall and blocked his way. However, Ichiji, Niji, and Yonji appeared right in time and combined their attacks to destroy the wall. Luffy, on the other hand, gets confronted by Big Mom. 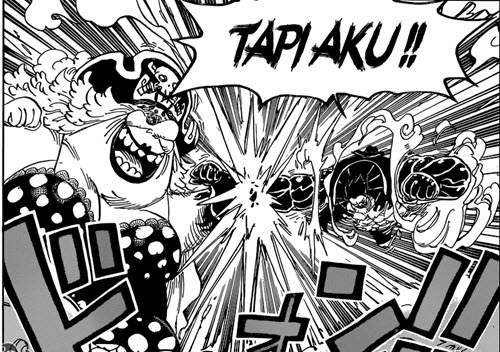 Luffy was fully determined to fight Big Mom, but Sanji tried to hold him back from directly fighting Big Mom. After telling Big Mom that only he will become the Pirate King, Luffy activated Gear Fourth and attacked her. Big Mom managed to easily block his attacks and told him that she won’t let him and the rest of his crew escape her territory. Sanji then grabbed Luffy right after his Gear Fourth got deactivated, and Judge then charged towards Big Mom. Shortly after this, Caesar turned around and saw that almost everyone was surrounded and captured by the Big Mom pirates. However, just like everyone predicted, the Tamatebako box exploded and the Chateau’s base was destroyed.

Clone Army To Fight The Big Mom Pirates In One Piece Chapter 872?

One Piece chapter 872 will arrive on July 17, 2017. Let us know if you’re excited about it or not in the comments below.