“One Piece” Chapter 870 spoilers indicate that Capone Bege may not survive the attack from the merciless soldiers of Big Mom. And if he does die, the Straw Hat Pirates including Luffy and his alliance will be left helpless. It would be interesting to see who will help them or will they be able to defeat Big Mom on their own.

In the previous chapter of the manga series, the situation becomes bad to worse for the Straw Hats-Fire Tanks alliance as the plot of Big Mom fails and she starts gaining her senses. The trapped alliance gets shelter in the humanoid castle form of Capone Bege. His entire body is a well-armed, huge castle-like complete with cannons, says Inquisitr.

Big Father Fails To Protect Alliance In ‘One Piece’ Chapter 870

Since the castle is actually the body of Bege, he will die if the castle is destroyed. And the Yonko punches the face of the Big Father due to which the smaller face of Bege starts bleeding.  He is trapped in slurry syrup by the soldiers of Big Mom and his cannons are also closed by mochis. According to speculations, Capone Bege will die in “One Piece” Chapter 870 thereby exposing the hidden alliance team to the wrath of Big Mom and her pirates. 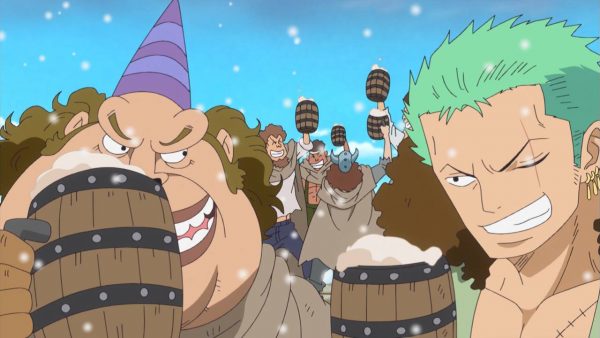 One of the speculations suggests that Luffy may get some help from Marco. However, it is quite possible that the Vinsmokes will unleash their true power and come to the help of Luffy’s team in “One Piece” Chapter 870, says iTechPost. Vinsmokes are currently with them hiding in the humanoid castle of Bege. The previous chapter revealed that the Vinsmokes activated their high-tech armor called shape memory armor and subdued the underlings of Big Mom who were tipped off to kill them.

It would be interesting to see whether the Germa 66 high-tech weaponry will sustain against the power of Big Mom and her fighters. Germa 66 is highly powerful in itself and even the Yonko wanted it for herself at one time.  Fans will only get to know about it when the show returns with “One Piece” Chapter 870 after a hiatus.