One Piece chapter 858 was released a few days ago, meaning that fans are now eagerly waiting for the next chapter to arrive. The previous chapters of the series have been really interesting as we got to see how Sanji managed to reunite with Luffy. Along with this, to fans surprise, Luffy formed an alliance with someone unexpected. The captain of the Start Hat Pirates formed an alliance with the captain of Firetank Pirates, Gang Bege. Currently, both of them are cooking up a plan against Big Mom to stop the wedding of Sanji and Pudding.

So without any further due, here is what happened in the previous chapter along with what is expected to happen in One Piece chapter 859.

In One Piece chapter 858, after successfully reuniting, the Straw Hat Pirates headed towards Gang Bege’s headquarters to discuss their alliance. The members of the Firetank Pirates greeted Luffy and his group. However, before they could enter, they were requested to take a bath as Bege is strict when it comes to appearance. Because of this, Luffy and his group had to thoroughly bathe so they can look presentable. In the bath, Luffy and Brook also managed to get their hands on a jar of milk. Surprisingly, when Brook drank it, the cracks in his bones were repaired. 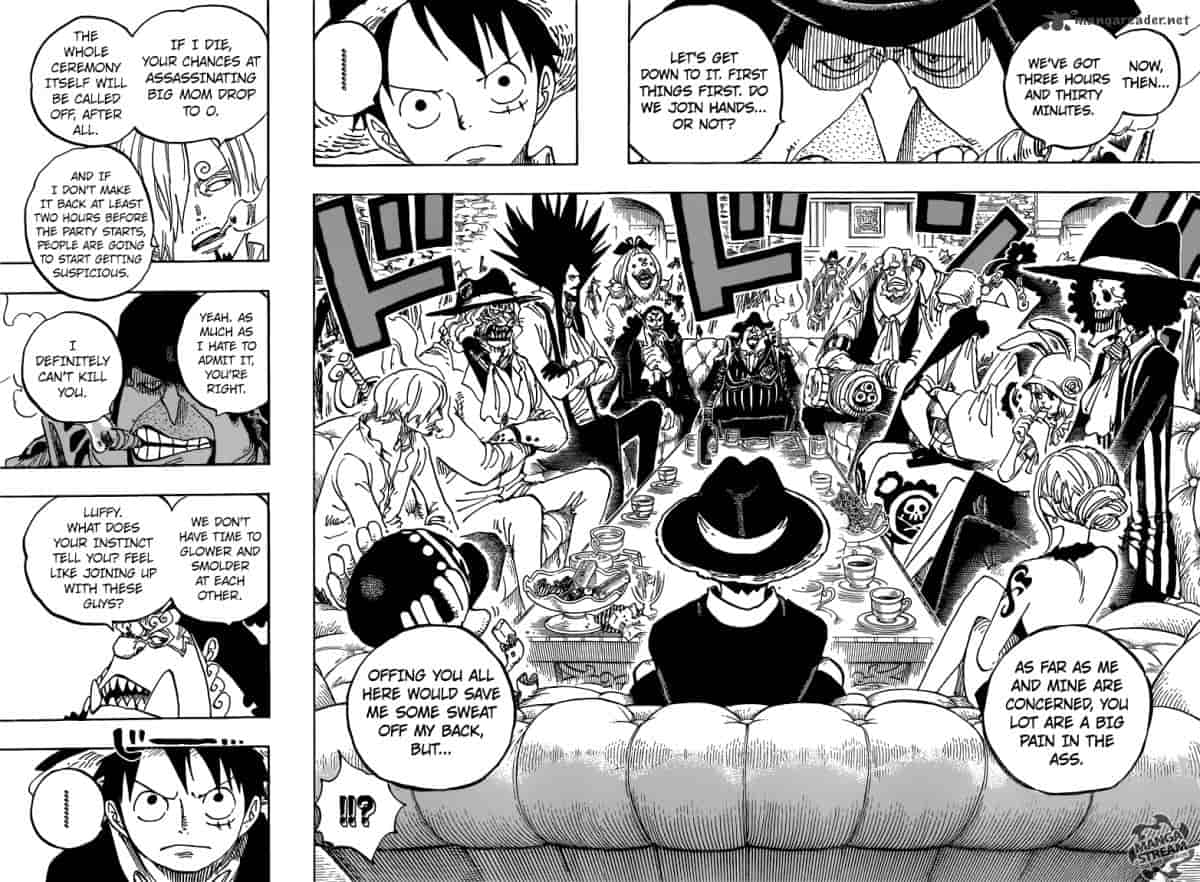 On the other hand, in the ladies washroom, Lady Chiffon talked about why Big Mom hates Lola so much. She revealed that Lola was actually arranged to marry Loki, a giant who was the prince of Elbaf. Big Mom arranged their wedding so she can form an alliance with the giants. However, as Lola didn’t have any feelings towards Loki, she ran away from the wedding. This is the very reason why Big Mom hates Lola and is disgusted by her. Big Mom even later tried to form an alliance again by replacing Lola with Chiffon, but that didn’t help and her relations with the giants got even worse. Chiffon additionally revealed that Big Mom insulted her and made her suffer just because of the fact that she looked like Lola.

Now, the next chapter of One Piece, chapter 859 will focus on the plan Luffy and Gang Bege will make to stop the wedding. As Charlotte Linlin has invited a lot of big criminals in the wedding, it would be a really dangerous place. Luffy and the others will have to be really careful while sneaking into the wedding. Sanji will tell Luffy to make an entrance after he hears a gun shot. Whatever the case is, the next chapters of One Piece are definitely going to be filled with a lot of thrilling moments.

One Piece chapter 859 will be released on March 20, 2017. Let us know if you’re excited about it or not in the comments below.