So without any further due, here is a short recap of One Piece chapter 853 along with what is expected to happen in chapter 854.

In One Piece chapter 853, after breaking out of the Prison Library, Luffy eventually went wild on Big Mom’s soldiers. However, while fighting them, Reiju surprisingly pulled him in. Reiju quickly explained it to him that Big Mom betrayed the entire Vinsmoke family, including Sanji, and that she plans to slaughter each and every one of them to get the Clone Army under her control. Although Reiju was explaining the whole plan of Big Mom and Lady Pudding, it didn’t surprise Luffy as he was already aware of the situation. 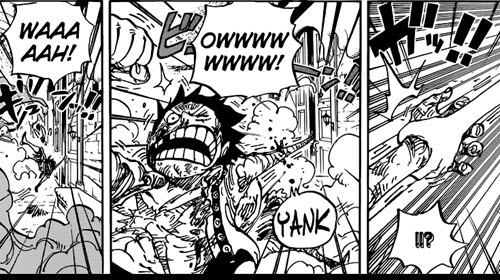 However, Luffy was happy that his comrade is alright and he is aware of what Big Mom and his daughter are planning to do. Luffy was previously worried that Sanji would go ahead and marry Lady Pudding as he was in love with her. But now, he knows that Sanji won’t just marry her after knowing the true identity of Lady Pudding. Sanji was also smart enough to not make a move until help arrives because if he told Pudding that he knows everything, then everything would’ve gotten ruined.

Luffy And Sanji To Reunite In One Piece Chapter 854

Reiju also previously encouraged Sanji to escape from the place. She even managed to replace the explosive bracelets Big Mom had placed on Sanji’s hands with fake ones. Sanji has a pretty neat chance of escaping now. But judging from the looks on his face and his personality, he will most probably reunite with Luffy first and will do everything he can to save his family from the hands of Big Mom. It is said that in One Piece chapter 854, Luffy will go and stand at the same place where he was before. The very place where he promised Sanji that he won’t make a move from there until Sanji comes back for him. So the latter will visit the same place again in hope to see his friend.

One Piece chapter 854 will be released next week. Let us know if you’re excited about it or not in the comments below.