One Piece chapter 844 was released a few days ago, meaning that fans are now eagerly waiting for the next chapter in the critically acclaimed manga series to arrive. The previous chapter was without any doubt, an emotional one as we got to see a clash between two friends, Sanji and Luffy.

Luffy is currently trying so hard to save Sanji from the hands of Big Mom, while he cannot simply escape from the wedding due to a big reason. So without any further due, here is what happened in One Piece chapter 844 and what is expected to happen in One Piece chapter 845. Keep in mind that the following recap contains major spoilers, so proceed at your own risk.

Sanji Clashed With Luffy In One Piece Chapter 844

In One Piece chapter 844, Sanji clashed with Luffy. The latter begin kicking Luffy with all his might after he asked him to join his crew again. At first, Sanji only told Luffy that he has no interest in becoming a low life sea thug by joining them again, as he is now a prince of Germa Kingdom. He further stated that he felt ashamed while he was a member of the Straw Hat Pirates. Upon seeing Nami, he tells her that she and Luffy have wasted their time by coming here to save him, while he isn’t worried at all. 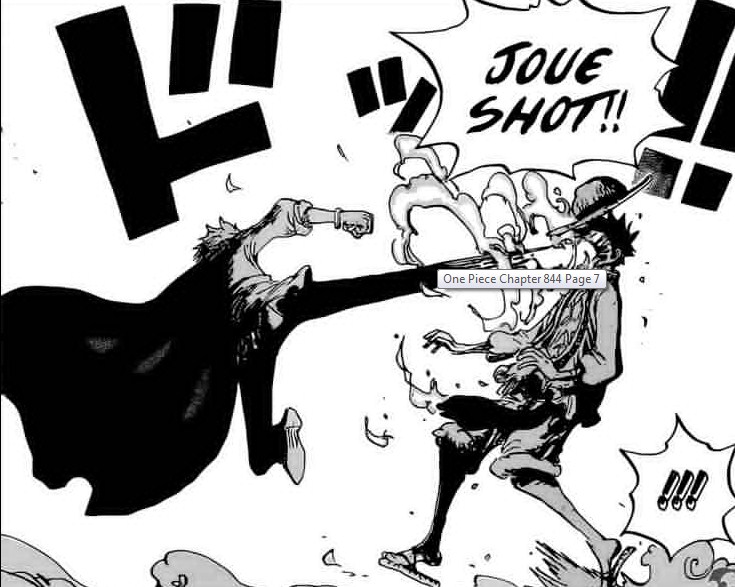 Nami was then shocked after hearing what Sanji just said. The looks on her face suggested that she believed what Sanji said. Luffy on the other hand, knew that Sanji was hiding something, so he told him that he isn’t buying any of this. When Sanji saw that Luffy isn’t leaving so easily, he got out of his carriage and started kicking his captain. Sanji used almost all of his attacks on Luffy, and some of his kicks landed on Luffy’s face. However, as Luffy knew that Sanji isn’t serious, he didn’t fight back. Sanji then used one of his special attacks to put Luffy down on the ground for good.

Luffy Tells Sanji Who He Is

After dealing with Luffy, Sanji backs off. However, Nami runs towards him and slaps him with anger. Sanji ignores it, and he then gets on the carriage he was travelling on. Just when the carriage starts moving, a badly beaten up Luffy gets up and yells Sanji’s name. He tells him that he won’t eat anything unless it is cooked by Sanji, and will starve to death if he doesn’t come back. He further states that he cannot become the pirate king without Sanji. Luffy claimed that he was the one getting kicked, but not the one who was feeling the pain.

Sanji Breaks Down In Tears

This makes Sanji emotional and he starts crying. His brothers make fun of him, while his sister, Reiju asks him if he wants to stop for a while or not. Sanji just keeps on thinking about how he can escape this madness.

Sabo To Make An Appearance In One Piece Chapter 845

Now, after hearing what Luffy said, Sanji will finally manage to escape from the carriage and will return to Luffy. The latter will most probably apologize for what he did, while Luffy will just laugh it off. Rumor is that the two will then team up to defeat Big Mom and the Vinsmoke family. However, the two of them are not enough for the two forces, so you can pretty much expect someone else to make an appearance soon. Maybe Sabo will come to their aid, as his current location is unknown.

One Piece chapter 845 will be released some time in this week. The chapter will focus on what Sanji will do after his clash with Luffy.

Let us know if you’re excited for One Piece chapter 845 or not in the comments below.