One Piece Chapter 839 was released a few hours ago and it surprised almost everyone. Many fans expected it to cover the fight between Luffy and Cracker, but instead, it focused entirely on the Vinsmoke family. However, this doesn’t mean that the chapter was boring or something like that. In fact, it revealed a big secret about the Vinsmoke family.

At the end of Chapter 839, we saw Yonji Vinsmoke taking his brother Sanji to a restricted area in the Vinsmoke compound, also known as the mobile Germa Kingdom. It was the place which the Vinsmoke brothers used to visit when they were younger, but Sanji was visiting this place for the very first time as he was completely shocked to see what was going on in there.

What Sanji saw was that the Vinsmoke family had been experimenting cloning in there. Though it wasn’t that surprising considering the fact that the Vinsmoke family is already way ahead in warfare technology. This is also the reason why Big Mom has formed an alliance with them. Who wouldn’t want such people on their side? The Vinsmoke family might be cloning powerful enhanced soldiers, which Luffy might have to battle at later stages. For now, the main thing that caught our attention at the end of Chapter 839 was Sanji’s reaction towards a body inside a test tube.

One Piece Chapter 840 Spoilers And Expectations

When Sanji entered the secret place, the first thing he noticed was a body inside a test tube. By the looks on his face, it seemed like he knew that person. The person might be someone from Sanji’s old place, The Baratie. We currently don’t know who he is exactly as the chapter ended shortly after Sanji got shocked, but we can pretty much expect the person to get revealed in Chapter 840. 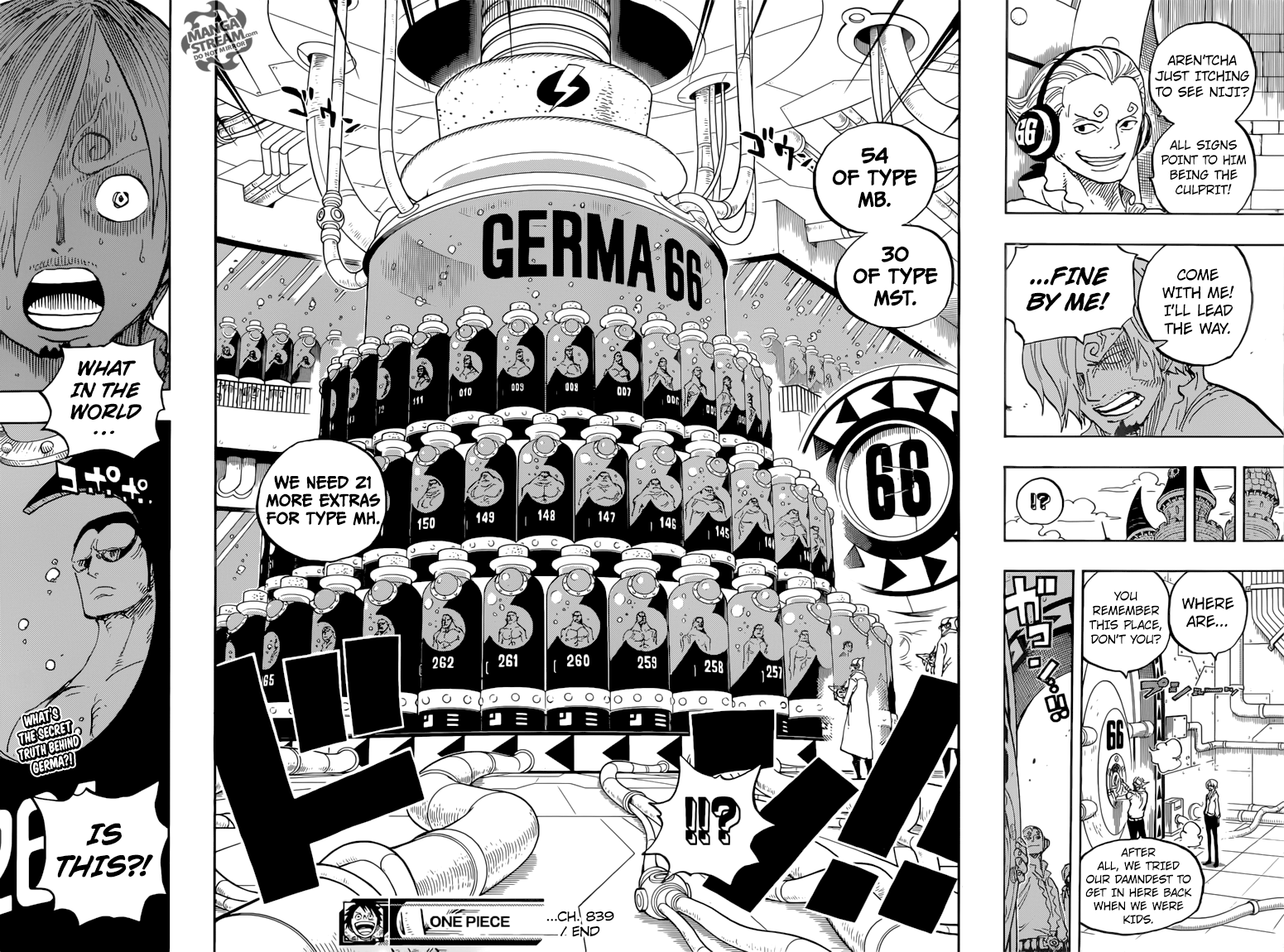 Now, because of this sudden twist, we cannot predict what the next chapter will feature. Maybe it will focus on the fight between Luffy and Cracker, or it might continue with the story of Sanji for now. The only thing which is stopping Luffy from getting to Sanji is Cracker, who has created an army of Cookies through his devil fruit powers. But even if Luffy manages to get to Sanji, will he return to the Straw Hat pirates? I mean Sanji’s father has warned him that if he tries to escape from the wedding, he will kill his master Zeff. So Sanji will have to be really careful while making a decision. We can expect to see this moment soon as Luffy has already weekend Cracker by destroying his Biscuit Armour and is only a few steps away from defeating him.

Along with this, Shanks is also expected to make an appearance soon. Some rumors claim that he will help Luffy in saving Sanji from Big Mom. This might happen as we have already seen Shanks appearing at the most unexpected places.

One Piece Chapter 840 will be released next week. Let us know if you’re excited for the next chapter in One Piece Manga series or not in the comments below.