Jennifer Morrison the protagonist from ABC show Once Upon A Time has recently revealed her exit from the series. After a long run of six years, playing Emma Swan, Morrison shares the reason why she chose to quit the show.

Character Emma Swan has been the daughter of Snow White and Prince Charming. She plays a significant role in the series to protect the town of Storybrooke, Maine from Evil Queen. In the last episode of Once Upon A Time, fans witnessed the much-awaited wedding of Swan and Hook followed by the musical.

Reason Why Morrison Exited Once Upon A Time

Morrison has revealed to TV Line that it has been a tricky decision to make. But also says that it has been 13 years of network television back to back. The schedule has been grueling. She continues, “…it made me stop and think about where I was at in my life and what I wanted and what my priorities were.”

For Morrison, the decision to quit the show has been personal. She did not want the information to be leaked out by some source. As she says,”I felt strongly that it should come from all of us, because we do all care about and appreciate the fan base.”

She also feels that her character has reached a beautiful place after the musical episode. “I feel like she’s really reached a new place in her life, in a way that felt like a good place to leave her,” as per aforementioned source.

Morrison Will Be Seen In One Episode Of Season 7

Officially the fairy-tale TV series has not been renewed yet, but Morrison says she will be seen in one of the future seasons’ episodes. She says, “I believe it’s the season premiere; she continues, “I can’t remember contractually if it was slotted as exactly.”Talking about Once Upon A Time Season 6 finale, Morrison says her decision might not affect the storyline of the final episode. She believes they knew her decision by the time they were writing. 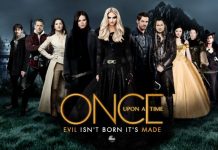 ‘Once Upon A Time’ Season 7 To Be Canceled? Future Uncertain As Jennifer Morrison’s Contract Not Renewed