Omate, a Chinese startup based in Hong Kong and Shenzhen, has released its yet another smart watch, namely the Omate Rise 3G. Unlike many other smart watches which the markets are flooded with, the Rise 3G is a standalone device which can be used to make calls and run apps independent of the user’s smartphone.

The Rise 3G features support for regular microSIM, so if your carrier doesn’t supports e-SIMs required by the likes of Samsung Gear S2 it’s a good news for you. The Rise 3G chipsets support 1,900MHz (US) and 2,100MHz (EU) 3G bands, plus quad-band 2G/EDGE.

The Omate Rise 3G comes with a fully round sapphire coated 1.3″ display (360×360 px). The screen is surrounded by a Carbon fiber bezel. The watch is powered by a MediaTek MT2601 chipset with Dual core Cortex-A7 processor and a Mali-400 GPU packed with 512MB of RAM and 4GB of internal storage. Connectivity options include Wi-Fi b/g/n, Bluetooth 4.1, and 3G. It has 580mAh battery capacity which will easily pass two days of normal usage. The watch also has a microphone and a loudspeaker for on the go communications.

Rated at 1 ATM water resistance and featuring replaceable 22mm bands, the Rise runs Omate OUI 4.0 based on Android 5.1 Lollipop having compatibility with Android 4.3+ and iOS 9+. The OUI 4.0 codebase is already open sourced on XDA-Developers.

The Rise will be listed for pre-order on December 7 under a 48-hour IndieGoGo promotion starting at sharp 10 am New York time, the reason for the promotion being the Carbon fiber bezel for which the company needs $30,000 funding in order to buy the tooling required to manufacture it. For the best part, Super Early Bird and Early Bird customers will also get a free Bluetooth Heart Rate Monitor manufactured by Nordic Semiconductor, which normally costs $50. Although the Early bird buyers can grab it at just $200 and $210 for the first 500 backers, the Rise is generally priced at $350 and will be launched at the end of March. 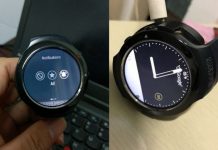