The limited-edition H440 Hyper Beast released last year by NZXT was a massive hit, it seems. That would explain why the company is rolling out a similar product in the S340 Elite Hyper Beast case.

The new S340 Elite Hyper Beast’s most prominent feature would be the wild paintjob embellishing the side of the case. Just like any other product in its category, the charm of the design element in the new S340 is also subject to your personal preference. However, the company seems to have done a pretty neat job in ensuring that the case turns out to be something that you would love to flaunt rather than stuffing it subtly in a corner. 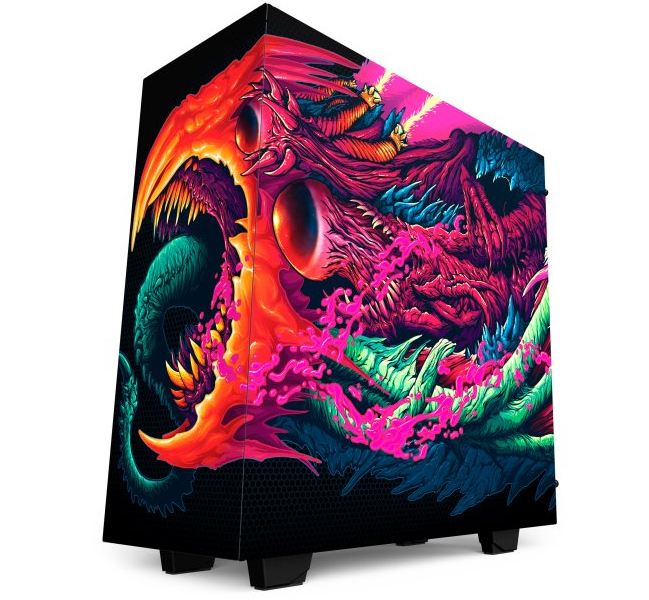 Just like in the H440, NZXT has once against used the services of artist Brock Hofer to do a rendition of Counter-Strike: Global Offensive “Hyper Beast” weapon skin for the new case.

The color job in the pain goes all the way to the inside of the case via a fluorescent-pink cable management bar along with a red LED on the power button. Other than the design element, there is practically nothing that separates the Hyper Beast from the standard-issue S340 Elite.

The tempered glass panel on the side without the paintjob looks decent enough. The front of the case offers microphone and headphone inputs, as well as two USB 2.0, two USB 3.0, and one HDMI (for VR headsets). Apart from that, there is also a magnetic cable management pluck.

On the inside, the case brings a number of fitters that can be fitted pretty much anywhere. Other important aspects include the radiators up to 280 mm, a PSU shroud with three SSD mounts, as well as enough space for up to three 3.5” drives and CPU coolers up to a height of 161mm.