When Nvidia launched the GeForce GTX 1080, the new card was accepted as the best GPU ever made. However, the GPU maker decided to surprise us with the Nvidia TITAN X Pascal graphics card, which is actually better than the GTX 1080. Now it is being said that Nvidia did not send out the review samples for this card, so TITAN X reviews will be scarce as of now. But we can surely give you the Nvidia TITAN X (Pascal) 3DMark Fire Strike scores.

As reported by VideoCardz, two 3DMark Fire Strike scores of the Nvidia TITAN X (Pascal) have been found on the web. These scores are not very illustrative, but you can at least know something about the TITAN X’s performance from these figures. 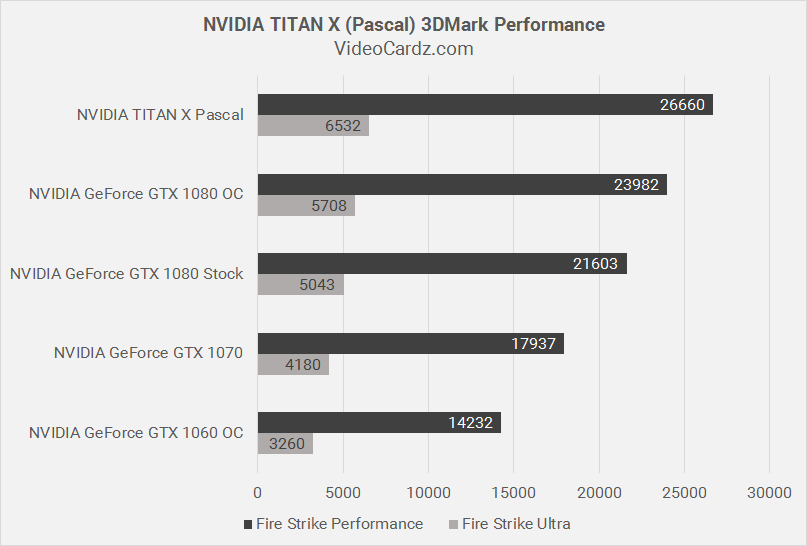 The above image shows graphics scores only, and you can see that the core clock of the Nvidia TITAN X in 3DMark goes up to 1.8GHz. Also, notice that the GTX 1060 overclocked cards, if they came with SLI finger, would be faster in synthetics as compared to the TITAN X. Mind you, the GTX 1060 costs 2.4 times less than the TITAN X.

Of course, these figures do not hit the bull’s eye and should be taken with a pinch of salt. Nvidia TITAN X starts selling tomorrow for $1200, so more accurate scores will come out soon. Stay tuned.