Nvidia didn’t do well as MediaTek and Snapdragon in the mobile chipset market, hence it started selling its own devices. The Nvidia Shield Tablet K1 was well received and came with the Tegra K1 chipset.

Well, it seems that the company wants to increase its product portfolio, as Nvidia has announced the Tegra X1 SoC already. Several rumors a few months ago were suggesting that a Nvidia tablet with this new chip could be released soon, but the speculation did not turn into reality.

However, it looks like that rumored tablet is going to be official soon, as a prototype of that tablet has been caught visiting GFXBench. Most of the specs of the device have been revealed and look very promising. Named as the Nvidia Shield Tablet X1, the tablet has been confirmed to get the Tegra X1 chip. GFXBench weirdly listed only four Cortex-A57 cores for the tablet’s CPU, which should actually be an octa-core CPU with additional four Cortex-A53 cores. 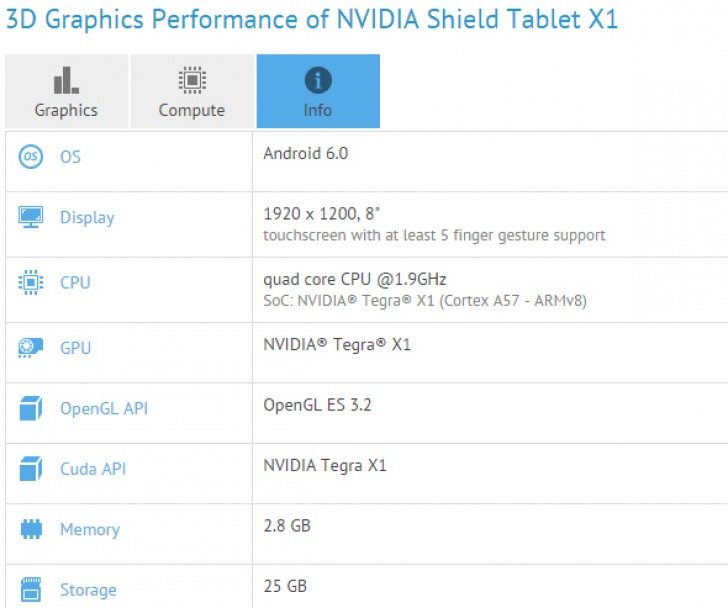 The custom-developed GPU in the Nvidia Shield Tablet X1 will be twice as good as the one in the Tegra K1. The new GPU will provide 1 teraflop of floating point performance. There will be an 8-inch touchscreen with a resolution of 1920 x 1200, while the memory configuration is 3GB/32GB. The tablet will come pre-installed with Android 6.0 Marshmallow and will feature GPS, Wi-Fi, and Bluetooth.