Nokia brand name has made a great entry or re-entry should we say, to the smartphone arena. Backed by HMD Global, Nokia launched Nokia 6 smartphone in China a few weeks ago to a tremendous success. The smartphone garnered a million registrations before going out of stock in just one minute on the launch day, January 19. 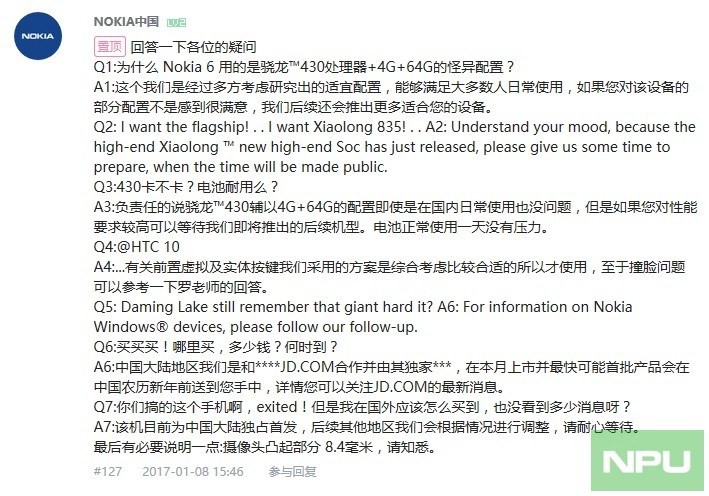 Things won’t be slowing down for Nokia any moment soon, as HMD Global is prepping to launch more new devices this year. And that includes a flagship offering. Nokia’s official Weibo account has suggested a flagship device with a Snapdragon 835 chipset is in the works and it’s just a matter of time before they release it.

The alleged device could be Nokia P1 rumored earlier and might even see the daylight at MWC 2017.

Nokia P1 is supposed to feature a 5.3-inch 2K display with Gorilla Glass 5 sheet on top. It is rumored to be powered by Qualcomm Snapdragon 835 chipset and 6 Gigs of RAM wit 128GB/256GB internal storage. The rumored specs sheet showed a 3,500mAh battery with fast-charge technology. Pricing for the device read around $800 (approx. Rs. 54,500).

The Weibo handle for Nokia also had one interesting revelation. It showed a smartphone featuring Microsoft’s Windows 10 OS which is quite opposite the plans for HMD Global of releasing android smartphones only. It read in Chinese, “Nokia Windows devices” and it’s not about legacy support either.

Anyways, nothing has been confirmed as of now by HMD Global so we advise you to take all this information with a pinch of salt. Do let us know in the comments section below if you will buy a Flagship offering from Nokia opposed to Samsung and Apple.