Back in November, Nokia announced its upcoming N1 Android Tablet stating it to launch in China first in early 2015.

A Chinese website Sina claims that Nokia has planned a press conference in China on Jan 7 and could release its N1 same time. The price would be same as previously reported $249 and it is  fairly affordable for what it is going to offer.

The Nokia N1, a 6.9mm-thin aluminum-made tablet would runs on Android 5.0 Lollipop and coming with Nokia’s own Z Launcher (which is already placed on Google’s Play Store to download). The slate got a pretty decent 7.9-inch IPS display with 1536 x 2048 pixel resoultion and powered by a quad core 64-bit Intel Atom Z3580 CPU clocked at 2.3 GHz. Other characteristics include a 8 Megapixels snapper, 5 MP front-facing camera, 2 GB of RAM, and 32 GB of non-expandable memory. A 5300 mAh battery powers the tablet. You can check full specs of Nokia N1 tablet here.

We are yet to discover where else, we can find the N1. Nokia stated that it expects to expand sales beyond China, hence the tablet will likely reach more markets not long after initial release. We’ll tell you when more details relating to Nokia N1 Android Tablet arrive. 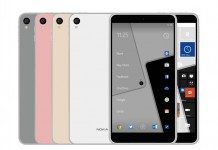