Have you ever felt the need to own a smartphone that does nothing but place calls? Ever wanted to own a phone just to make calls with friends and family? Tired of a smartphone and longing for the feel of classic Nokia feature phones? Well, it looks like Nokia has heard you! Nokia – now part of the Finnish company HMD Global – recently launched two new Nokia phones – Nokia 150 Single SIM and Nokia 150 Dual SIM.

Nokia continues to be the preferred brand for feature phones. Nokia once dominated the mobile phone industry with its strong, affordable line of feature phones. And it looks like the company will the continue the tradition of what it’s always been great at – unconventional feature phones! Nokia’s strategy to make a comeback with feature phones may very well succeed, given that many people in the world today are waiting to own a phone that does the bare minimum for them. The need for bare, not-so-feature-rich phones can be addressed best by Nokia. No other company even comes close.

A HMD Global press release said – “To ensure users can stay connected for longer, the phones have outstanding battery life, with talk time lasting up to 22 hours, and standby times of up to 31 days for the Single SIM and 25 days for the Dual SIM variant. The phones charge with a standard micro-USB charger and come with a LED torchlight.” As for the specs, both the smartphones sport similar features, including MP3 Player, VGA camera with LED flash, Bluetooth, and Nokia’s SLAM sharing technology.

The phone is initially targeted for release in selected markets. These include IMEA, APAC, and Europe. And guess the price? Well, the phones are priced under $25!! Yes, the best features of “feature phones” for as low as $25! Nokia loyalists have all the more reasons to cheer about! 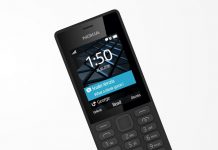 Nokia 150 Going To Become A Hit In India: The $24 HMD Global Smartphone Is Taking On Flagship Phones