Sean Murray, Founder of Hello Games has shown off a new gameplay video in a new post over at the PlayStation Blog showing off a video of him playing No Man’s Sky, while briefly handing over the control to Anthony Carboni. As the blog post title reveals, Murray ends up regretting this, as Carboni takes to destroying everything in his path, before being finally confronted by the game’s Sentinels. 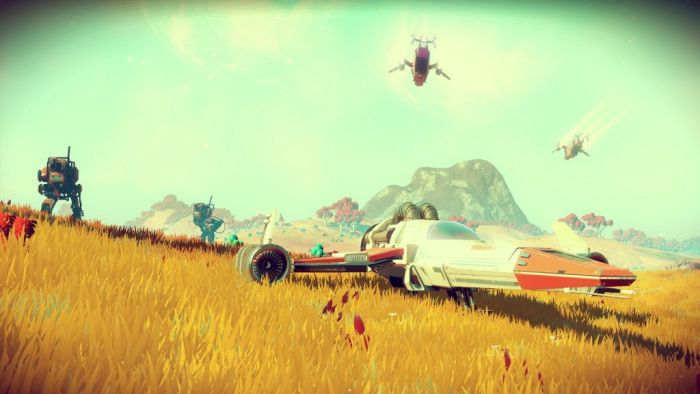 As Murray stresses in the beginning of the demo, this demo is, like all others before it, completely unique and features a planet that has not been explored before by anyone – not even the developers. Murray shows off the game’s monoliths, with which the player can interact in interesting and unpredictable ways while studying an alien language. Then, after meeting the wildlife of the planet, Murray heads on out to a base where we see an intelligent alien being. Communicating with these species positively can improve your standing with these species, or alternately, cause damage to your reputation with them.

The part I liked the best was later in the video, where Murray heads over to a spaceship and shows the planet from the first half of the video through a space porthole, and reveals that the area that Murray and Carboni explored in the first half was about the size of the aiming reticule. The scale of this game really is something else.

No Man’s Sky releases on 21st June in North America, 22nd June in Europe, and 24th June in the United Kingdom. It will be available on both PS4 and PC. Also, Sean Murray has a beard now.

Check out the demo below and let us know what you think in the comments.