All the Nintendo Switch Fans waiting for new stock updates, there is one for you. The news about Nintendo Switch stock at Gamestop, Toys R Us, Amazon, and Tesco just came in for this week.

Nintendo Switch and NES Classic Mini are both Nintendo’s top grossing and the most popular gaming consoles. At the moment both of these consoles are facing stock shortages.

Fans of Nintendo Switch who previously missed out on the console at Nintendo Switch sales events might still be able to nab one at a few stores this week. Major retail stores such as Gamestop, Toys R US, Amazon, and Tesco, are getting the restocks at a very slow pace.

Despite Nintendo’s efforts of keeping up with the demand and upping their production capacity, the Hybrid console stocks are still not available in large quantities in both North America and the UK. So, the fans are facing difficulties in acquiring the console.

A recent update about the Nintendo Switch Stock suggests that Toys R Us are going to have the stock Today, on 9 April. The Stock will be available at all Toys R Us stores across the US.

Toys R US further confirmed that the fans of Nintendo Switch will have to head to the Brick-and-Mortar stores if they want to purchase the console. And all the fans should arrive before the stores are opened. So, if you want to grab one, you should be at the store at around 10 am.

For all the UK Nintendo Switch fans, the stocks are also available at Toys R US stores. Check out their website for further details and be there at the store at the earliest.

On Amazon, The Nintendo Switch Neon Red and Neon Blue models are available for Pre-purchase at the moment. As the Amazon site suggests, the stock is going to be available on April 10, 2017. So Don’t lose this opportunity as well.

At The GAME, The Nintendo Switch stock aren’t yet available and the site has a message that states

“At this time we have not received official confirmation of the next stock delivery of this product. We are working extremely hard with Nintendo to receive more stock of the Nintendo Switch for customers.

Until we have our stock delivery confirmed by Nintendo, a placeholder date of TBC has been put onto this product. This can change once the delivery of stock has been confirmed and the status of your order will change accordingly.”

Tesco is facing the same situation. Their official page lists a message that says that the Nintendo Switch stock isn’t available for purchase yet.

So all the fans of Nintendo Switch in North America and UK, Nintendo Switch is once again going to be available at your favorite stores. Have you got one for yourself or are you still waiting in the lines? Do Share with us via the comments.

Nintendo Switch Stock Update: Fans Could Face Long Time For Next Batch Of Stock To Arrive 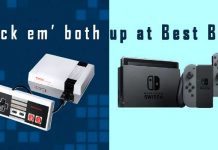