We all know John Cena like we know our friends. We love him as a Wrestler but most of the people don’t know Cena as a True Nintendo enthusiast. John Cena is 16 times WWE Champion and a true Nintendo Switch enthusiast who spent a lot of time playing games on Nintendo’s NES. 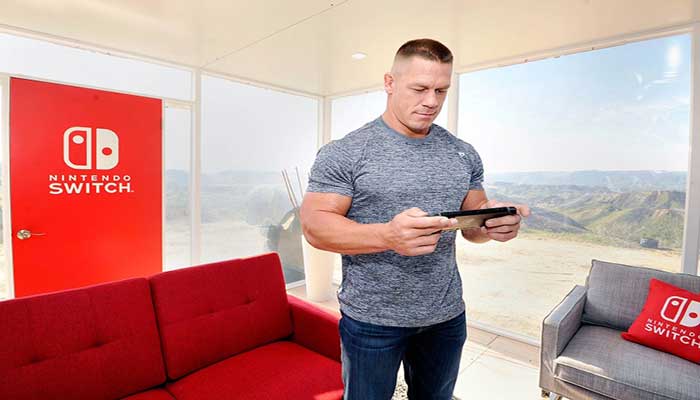 John Cena recently agreed upon teaming up With Nintendo for the New Nintendo Switch promotions. He has reportedly spent a day in a mobile home where he spent the day playing the new The Legend of Zelda: Breath of the Wild. Later on, Cena shared his thoughts about the upcoming Nintendo Switch in an Interview with Sports Illustrated.

Cena, Nintendo, and his Childhood

John Cena said in the Interview that his relation with Nintendo is quite old and natural. Talking about his favorite Nintendo games Cena said that he grew up playing Nintendo games such as Donkey Kong, Super Mario Bros., Urban Champion, Ice Climber, and Gyromite.

He further stated that “I am Certainly a child of the original Nintendo Entertainment System, or NES, as the gamer Hall of Famers attribute it,”. He further said, “That eight-bit graphical interface has truly stood the test of time, and now you see so many vintage designs and content available in eight-bit.”

In another wave of comments, Cena said that he grew up with three brothers and two controllers. As a born challenger, he loved the competition and recalled him and his brothers fighting for the controllers. This resulted in interesting Cena into Sports games that he could play on his Nintendo Entertainment System. Talking about his favorite sports games on Nintendo Cena gave a thumbs up to Super Tecmo Bowl. He also told Sports Illustrated that he is an Action and Fighting games freak and he has played legendary games such as Contra, Metal Gear, and Punch out.

Nintendo Switch and John Cena on a Tag Team tour

Cena recently visited Saint Clarita, California as part of the Nintendo Switch Promotion tour. There he met with fans and a lot of YouTube influencers.

Cena also Tweeted about the Promotion of Nintendo Switch and posted a picture of him holding the new Nintendo Switch. He tweeted it with the caption: “Starting my day with @NintendoAmerica and the new #NintendoSwitch. Who’s ready for some #Zelda: BreathoftheWild?”

In another statement, Cena said that “I’m floored by the technology of the Switch, and the versatility of the console is second to none,”. He was praising the innovative flexibility feature of Nintendo Switch. This particular feature is Switch’s main selling point as well.

Nintendo Switch is a new Hybrid Console by Nintendo, a beautiful and innovative portable gaming system. As we know it comes in several parts, the most notable feature of Switch is known as Joy-Con Controllers that makes you enjoy the device’s portability. This feature enables you to attach or remove the device’s screen. The screen also works as the main console when docked on its separable dock platform.

The Release of Nintendo Switch:

Nintendo Switch is due to release on March 3, 2017, worldwide. A number of new and exciting games are also releasing with the console. Following are the games that are launching with Nintendo Switch on 3rd March 2017.