An anonymous person working at a very important retail store has leaked details about the upcoming Nintendo NX. Furthermore, the NX subreddit has pretty much confirmed most of the rumors going around in the previous dates. Consequently, we have everything from key features to pricing.

“We have done our best to confirm this individual’s identity and we feel pretty confident about it. However, someone who is determined enough can fake damn near anything as evidenced by that 3D printed controller hoax from a while back. Consequently, make sure to take everything we’re about to post with a grain of salt.

We have verified that our source works for a very large retailer. Furthermore, we have verified that this source is in a position to have access to this sort of information. However, exact details of what was provided will not be released. We take protecting the identity of our sources very seriously. Furthermore, our source has added the disclaimer that this is all initial information and subject to change as time goes on.

“Interact with your game on the go.” phrase seen on a poster.

Strong co-branding effort with a Mario launch title on many posters.

Console is currently set to launch with least 4 titles on deck.

Stores should be receiving demo units around February.

The Nintendo NX is currently set to have a bundle option.

The contents of this bundle is currently unknown.

Bundle price is currently sitting at $399.99

The packaging for the Nintendo NX will be slightly larger than the Wii U’s packaging.

Furthermore, the packaging is relatively clean and simple and is similar to the Wii U in terms of package design.

The color scheme for the packaging is white and blue (compared to the Wii U’s blue and black).

The packaging still says “NX” however there is still no indication if this is a placeholder or the final name.

The areas of the packaging that would usually depict the hardware were blurred and redacted by Nintendo in attempt to keep it hidden.

Games will be on cartridges – Edit: This secondary source (who had not yet completed verification) has been busted.

4k streaming has been mentioned. – What this likely means is playback of content such as Netflix, etc. Not gameplay.

1080p and 60fps are being used by the marketing teams in relation to gameplay on to the console portion. I’ve heard unconfirmed rumblings of 900p for the infamous hybrid part of the device.”

You can read the rest of it on Reddit. The 4K streaming part really got our attention. If true, this can definitely be a game changer for Nintendo since they would be left behind if they didn’t get on the 4K train like every other company. 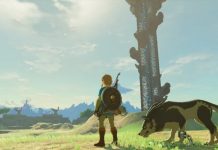