Microsoft’s Continuum features seem to be gathering pace fast and manufacturers all around the world are trying to get a piece of the cake. Using the Continuum feature, the phone will automatically adjust its user interface to match the current situation. If the phone is connected to a monitor, it will display a Windows 10 desktop as seen on PC. Microsoft Surface 3 Pro has this feature implemented in it and has been received extremely well. When the keyboard is attached, it shows the Windows 10 desktop and when it is removed the UI is shifted to the tablet interface. NexDock is a crowd-funded device that costs 99$. It comes with a 14-inch monitor and a Bluetooth keyboard. 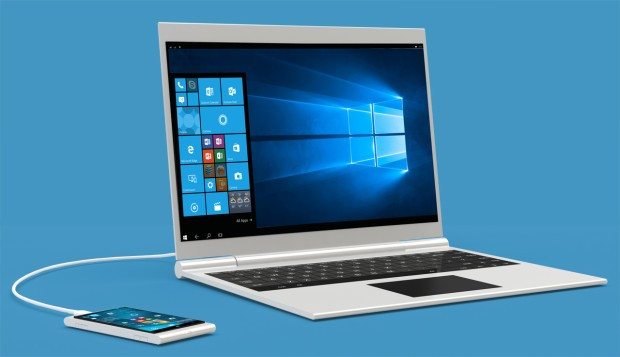 Simply plug in your Windows 10 phone and let NexDock work its magic. It weighs in at 1.4 kilograms and the display has a resolution of 1366×768 pixels. That’s not all, it comes with a massive 10,000mAh battery, a mini HDMI port, 1 TF card slot, 2 USB ports and a headphone jack too.

But one thing that will fascinate everyone is NexDock’s ability to connect Raspberry Pi and other mini PCs to it. With the Raspberry Pi, NexDock can be converted to become the world’s cheapest laptop. It can also be connected to a wireless display adapter to stream content directly from your phone. The mini HDMI port allows for connecting many other devices. It even allows users to play games from the iPhone on its monitor. With an asking price of just 99$, NexDock may be the next big thing. Pledge your support on their IndieGogo page to help them reach their target.