Xiaomi ventured into the notebook market when it launched its first ever laptop, the Mi Notebook Air, earlier. The laptop was released in two different variants and was launched at very competitive prices. It seems the Mi NoteBook Air brought good business to the company, as a new Xiaomi notebook is going to be launched next week.

Xiaomi has released a teaser image on its official Weibo page, revealing that a new Mi Notebook is going to be launched in China on 23rd December. Other than that, we cannot really make out what’s written in Chinese on the picture. There’s the China Mobile logo on the image, and the laptop has got a 4G signal indicator on the screen. This suggests that the new Xiaomi Mi Notebook will come with 4G LTE support. 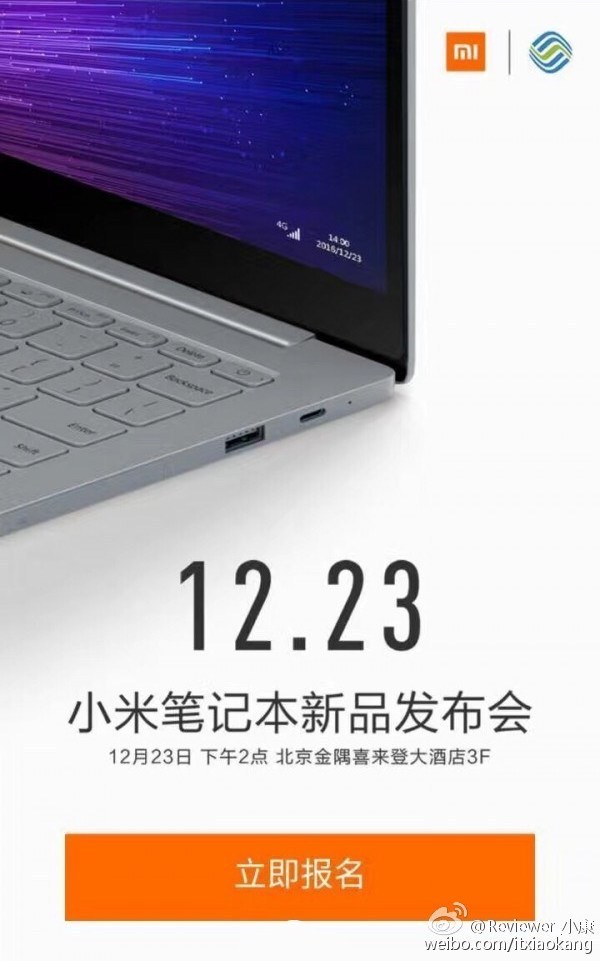 It is being expected that Xiaomi will continue the same design as it used in its earlier laptops. The major change in the new notebook will be the addition of a SIM card slot, thus adding 4G LTE connectivity to the laptops. Other than that, we don’t think Xiaomi will introduce any significant hardware changes.

The new Xiaomi notebooks are expected to come in 12.5″ and 13.3″ variants. However, the notebooks might come with improved Quad HD displays instead of Full HD screens seen in the first Mi Notebook Air. The previous notebooks also came with USB Type-C, USB 3.0, glass trackpad, backlit keyboard, etc.

More details will be revealed next week at the official launch event, so stay tuned for further updates.