A new study published in Proceedings of the Royal Society B is based on observing wild baboons at Amboseli National Park located in Kenya for almost four decades (between 1978 and 2015), and it explains the extremely aggressive behavior of male baboons. 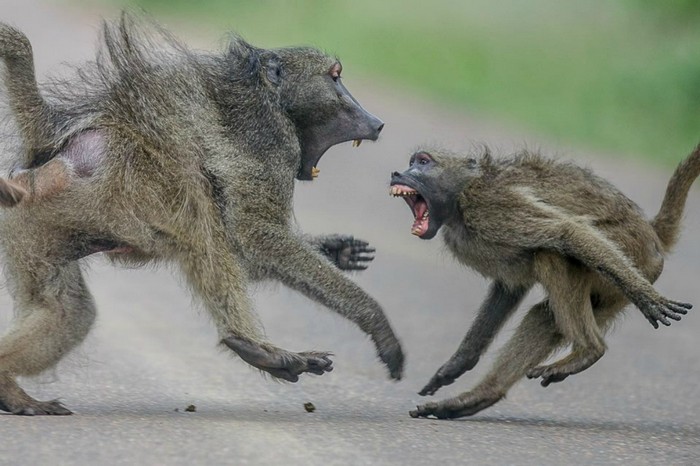 According to the study, when aggressive males join new packs where fertile females are scarce, the violence escalates, with aggressive males attacking young ones as well as pregnant females. If the pack is lacking fertile females, male baboons will kill infants and cause miscarriage in order to bring back the females into reproductive readiness since pregnant and nursing female baboons aren’t ready for having sex for at least a year after they give birth.

The violent males are a minority, and this is the first time for scientist to notice the attacks on mothers to force abortions. As we already mentioned, infanticide is relatively common among many animal species, but feticide very uncommon behavior.

In some packs, up to a quarter of pregnant or lactating female baboons and their children were attacked by aggressive males. Scientists found out that even if they or their offspring are attacked, the females will mate with belligerent males. The study found that many 1 and 2-year old infants were spared, further confirming that male baboons only target pregnant females and ones that gave birth less than a year ago.

The authors explained this behavior by saying that “By killing an infant, an infanticidal male causes the infant’s mother to return to a reproductive state sooner than she otherwise would by eliminating a period of continued lactation during which she would not be cycling.”

During the observation, the Amboseli National Park’s baboon population had 2 percent infant deaths as well as 6 percent miscarriages caused by violent male baboons. During the times of absence of fertile females, the death rates grew as much as three times.

Matthew Zipple, a graduate student in Professor Susan Alberts’s lab at Duke University, noted that “In situations where males have few opportunities, they resort to violence to achieve what’s necessary to survive and reproduce.” Females who lose their babies become pregnant again within the 41 day period, showing that aggressive males are hitting their goals.