AMD’s forthcoming GPUs have finally bagged the requisite certification from RRA, meaning the chip giant’s new lineups are now closer than ever to hitting store shelves. Said GPUs include the Vega 10 device, as well as the Polaris 12 GPU.

Which upcoming graphics card will these GPUs will be powering still remains a matter of speculation, although it would be perhaps safe to assume that at least one of them will correspond to the much-anticipated RX 490 flagship — or whichever moniker AMD decides to go with.

For the uninitiated, RRA, acronym for South Korea’s National Radio Research Agency, is the regulatory body whose stamp of approval is mandatory for any silicon-based electronic produce before it can be made available to the consumer market.

As you already know, the RX 490 is going to be a 4k ready flagship that is expected to squarely challenge arch rival NVIDIA’s GeForce GTX 1080, albeit from a lower price-point. In other words, the RX 490 flagship will be more like the crown jewel in AMD’s RX family line.

Worth noting, the current Polaris-powered lineup is spearheaded by the RX 480 which is comparable to the GTX 1060 in terms of overall graphical performance. AMD has previously admitted that the Polaris 10 happens to be the largest 14nm FinFET GPU from the company as of now — a statement that expectedly raises the question what we should expect from the next flagship.

Coming back to the RRA certification, the documents currently available in the public domain reveals the following details: 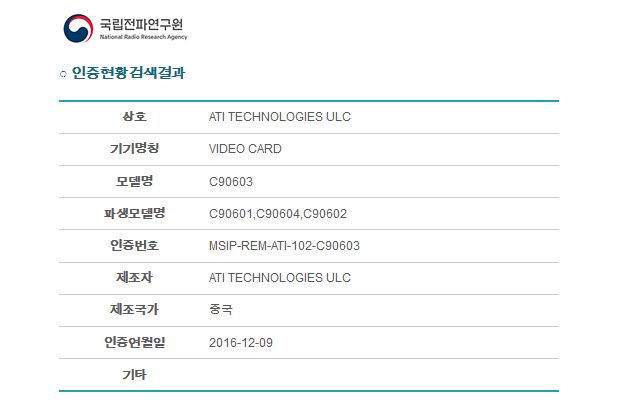 SIP-REM-ATI-102-D04001 – This GPU was granted the certification on November 17, 2016, and based on its nomenclature, we can safely assume that it is a Vega-based GPU. Also, judging by the fact that it is one of the first RRA certified variants of the Vega architecture, it is likely to be the Vega 10.

MSIP-REM-ATI-102-C90603 – The second GPU comes with a codename that we can not recall seeing anywhere else in the past. It is more likely to be the Polaris 12 GP with four sub-variants (as listed in the certification). It was awarded RRA certification on December 9, 2016.