MobiPicker
Mobiles Android New Amazon Fire HD 8 with Alexa Support and Upgraded Storage Launched
Share on Facebook
Tweet on Twitter
Deal Alert: 49% Off on ExpressVPN
Touted as #1 VPN in the world, ExpressVPN is now offering 49% off & an additional 3-months of service on its annual plans.

Amazon has launched a new Fire HD 8 tablet in the US market. The 8-inch tablet comes with several upgraded features including storage. It comes with two storage options – 16GB and 32GB options. Also, it will be supported by 1.5GB of RAM. The new Amazon Fire HD 8 claims to offer up to 12 hours of battery life. The new Fire HD 8 will cost $89.99 (approx. INR 6000) for 16GB variant, and $119.99 (approx. INR 7990) for 32GB one. It is now available for pre-order from Amazon.com. The shipping starts from September 21st. 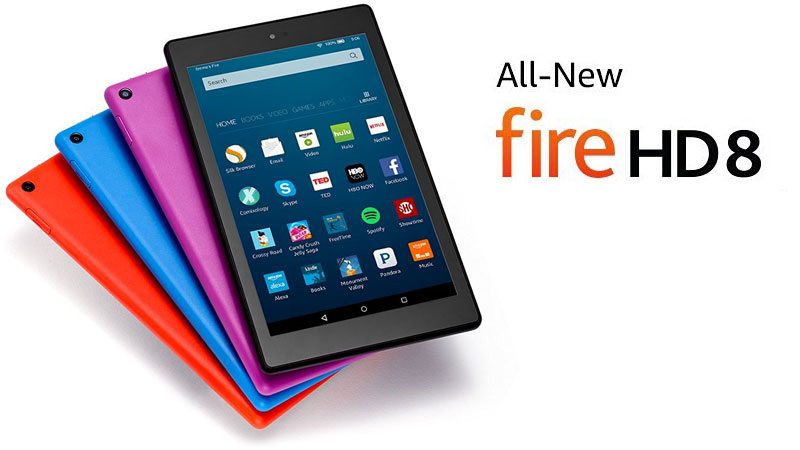 Amazon has also added Alexa support to the package. Alexa is the Amazon’s own cloud-based voice service that allows users to use voice commands. You can play music, launch games, read audio books, get news, check the weather, etc. using this service. Soon, the Alexa support will be available for the new Fire HD 8 and other Fire tablets via Fire OS 5.4 update.

The new Amazon Fire HD 8 sports an 8-inch IPS display with a resolution of 1280 x 800 pixels, and a pixel density of 189ppi. It is powered by a 1.3GHz Quad-Core processor. The tablet will be supported by 1.5GB of RAM. In the 16GB storage variant, 11.1GB will be available to the user, while in the 32GB variant, users will get 25.3GB available storage. The memory can be expanded up to 200GB with a micro SD card. The new tablet runs Android-based Fire OS 5. Features include X-Ray, ASAP, and Second Screen.

The new Amazon Fire HD 8 features a 2.0 MP rear camera and a VGA front-facing camera. Connectivity options on the device include Wi-Fi 802.11 a/b/g/n/ac (Dual Band), Bluetooth with support for A2DP, USB 2.0 port, and a 3.5 mm stereo jack. It comes with a built-in microphone, and integrated stereo speakers [powered by Dolby Audio]. The new tablet comes with a 4,750mAh battery. Other features include an accelerometer, gyroscope, and an ambient light sensor.