On the tenth anniversary of the Alpha series, Sony has announced its new a99 II camera. The new Sony a99 Mark II features a 42-megapixel sensor and a 5-axis image stabilization. It is also capable of 4K video capture with no pixel binning. The A-mount SLT camera is priced at $3200 [body only] and will be available in November. 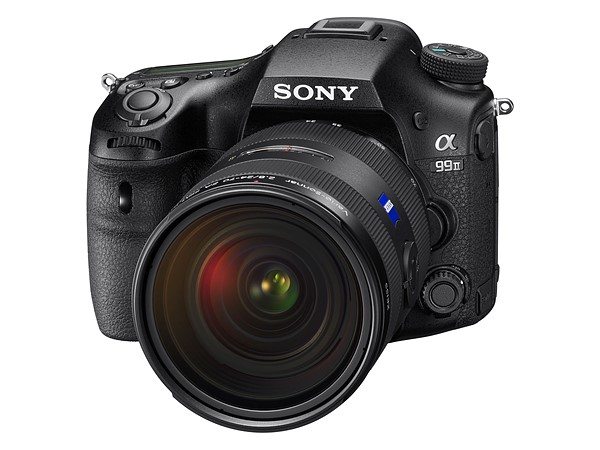 The Sony a99 Mark II camera’s 42.MP sensor uses BSI-CMOS technology with copper wiring for ultra-fast readout. It also has a newly-developed front-end LSI (processor) to help with the speed of the sensor. The 5-axis image stabilization is rated to 4.5EV by CIPA testing.

The Sony a99 Mark II camera offers continuous shooting at 12 frames per second with AF/AE tracking and 8 fps with ‘minimal’ EVF blackout. It features dedicated PDAF system with Sony’s ‘Hybrid Cross AF points.’ It features 79 AF points which work together with 399 on-sensor PDAF points. The new camera allows you to focus down to -4EV.

The Sony a99 Mark II camera body is 8 percent smaller than its predecessor. It is made of magnesium alloy. The new redesigned shutter has a lifespan of 300,000 exposures. The camera features a large XGA OLED viewfinder with a magnification of 0.78x, and a fluorine coating to keep off the fingerprints and oil residue. It also features 3-inch LCD display (non-touchscreen) that can tilt in 3-axis. There is a ‘silent Multi-Controller’ on the front of the camera that comes with a click ON / OFF feature. The new camera comes with a new menu system, compared to the a99. The Mark II also has dual SD card slots.

As far as video is concerned, the a99 Mark II can capture 4K videos at 100Mbps (using XAVC S) with full sensor read-out and no pixel binning. There is also a Super 35 option with 1.8x oversampling. There is a ‘Slow and Quick’ mode that allows users to jump between 1 and 120 fps at the push of a button. Other features include zebra patterns, time code, S-Log2 and S-Log3 profiles, and 4:2:2 output over HDMI.