We are all pretty familiar with Hubble Space Telescope. It was the first major optical telescope that was placed in space so that it could get an unobstructed view of the universe, above the distortion of the atmosphere, far above rains clouds and pollution. Hubble has made over 1.3 million observations since its mission in 1990. And now Hubble’s successor – James Webb Space Telescope – is all set to change the way we look at our Universe.

NASA unveiled the full-scale model of the James Webb Space Telescope during the Super Bowl live festival in Houston. The James Webb Space Telescope will be a large infrared telescope with a 6.5-meter primary mirror. The telescope – a result of an international collaboration between NASA, the European Space Agency (ESA), the Canadian Space Agency (CSA) – is scheduled for October 2018 launch. It will be the premier observatory of the next decade as it studies every phase in the history of our Universe – from Big Bang to the formation of solar systems supporting life. Once in orbit about 930,000 miles (1.5 million km) from Earth, the Webb telescope will provide images of the first galaxies ever formed and explore planets around distant stars.

James Webb Space Telescope has been developed with several innovative cutting-edge technologies, including a primary mirror made of 18 separate segments that unfold and adjust to shape after launch. The telescope’s biggest feature is a tennis court sized five-layer sunshield that is designed to reduce heat from the sun by a factor of million. It also has cameras and spectrometers capable of recording extremely faint signals.

NASA puts football to the test

At Goddard Space Flight Center, in honor of Sunday’s Super Bowl, NASA put a football through tests similar to the ones James Webb Space telescope was put through. The football did hold together spinning in a centrifuge but was completely shattered at cryogenic temperatures. “We’d rather have something break during a test on the ground, where we can understand the problem and fix it, than in space”, said Christine Nolan Essig, a member of Webb’s outreach team. 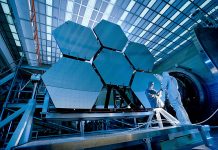